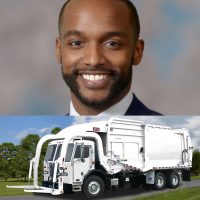 WHY PERKINS’ GARBAGE FEE PLAN MUST GO IN THE GARBAGE

Why? Because our mayor proposes it in (very) bad faith.

From the jump, Mayor Perkins told us his $18-per-month garbage fee was necessary to raise pay for our sanitation workers, truck drivers in particular, to prevent them going to Bossier for much more money.

Then he threw in how this new tax (it is NOT a fee) would also funnel a relatively small amount into the city’s reserve fund.

Instead, we now know, Council approval will hand Perkins the new “garbage fee” money, plus the old garbage service money, plus $5.6 million a year into the reserve (for who knows what).

The most recent blockbuster, though, is that very little of the money, perhaps only 5% according to City Hall sources, would go for raises to garbage drivers.

To see what a spitball Perkins threw us, here are some deliberately hyped comments from his roll-out newspaper opinion piece on January 16th:

As I wrote in my January 16th article (SEE link below), residents were tipped that something was amiss when Perkins, only two weeks after taking office, fired the man in charge of these city services, Public Works Director Mike Woods, who told The Times …

… “I mean, everything was fine until he got here. Everyone was happy. We were running behind on garbage, but we managed to catch-up. That (sic) wasn’t anything anybody could do about it. It was just a matter of not having any employees to do it.”

Looking back, that highlights how Perkins’ plan was / is a solution in search of a problem … with Woods a scapegoat.

All things considered, all of this was and is about pumping up the reserves, even though our reserve is about what it always is, for Shreveport and many, many other cities.

The screamingly loud and unanswered question is why Perkins “needs” to pump up the reserve? ‘Perhaps those rumored, huge bond issues he came back here to pass?

Too, as I detailed in my January 22nd article (SEE link below), Perkins must produce any independent legal justification for denying our right to vote on this. Since it is a TAX, and not a fee, that is our right.

Finally – and certainly no longer surprising – the mayor now refuses to legally protect the sanitation services revenue by designating it a city Enterprise Fund. That way, the money could be used only for solid waste disposal.

The City Council will discuss this concoction in its Administrative Conference on Monday, with a vote possibly as soon as their meeting the following day …

… less than one month after Perkins dumped it on us.

Bad (faith) and governance by design.