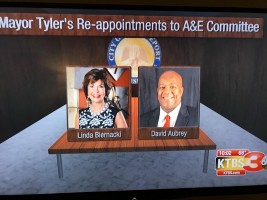 WHY DOES MAYOR TYLER REFUSE TO CLEAN-UP A & E COMMITTEE?

Six weeks ago, thanks to City Councilman James Flurry, it seemed a long overdue clean-up of at least a key cog in Shreveport’s corruption wheel might be in the offing.

Now, instead, Mayor Ollie Tyler acts to keep things just as (bad as) they are.

As I wrote on November 29th, the anti-corruption good guy, City Councilman James Flurry, had publicly targeted that cog in the City Hall corruption wheel, the Architect & Engineering – or “A & E” – Committee.

(Here is the article: http://realshreveport.com/councilman-flurry-targets-shreve…/)

Mr. Flurry was then, for 2017, Chairman of the City Council, and thus the City Charter-designated Council member on the A & E Committee.

Councilman Flurry and many other Shreveporters had been informed by a steady flow of articles on these subjects from myself and others, including KTBS News and KSLA News, especially during October.

As 2018 rolled in, Mayor Tyler doubled-down on A & E Committee lawbreaking.

Then and there, the players in question went about their same ol’ same ol’ ways of passing out contracts for serious amounts of taxpayer money.

Although Minutes of the meeting are not (yet?) publicly available, we do have the pre-meeting Agenda dated December 27, 2017. Though no project bidders are identified, contracts totaling $2,450,000 were to be doled-out.

Yes, there were some new features to this meeting, but none of them good.

Mr. Flurry has been replaced as the City Council member on the Committee. Now in that seat, and Council Chairman, is Jerald Bowman, Jr.

A rumored candidate for mayor in this fall’s election, Bowman is the supposed choice of Mayor Tyler and her financiers.

It was Councilman Bowman who, last September, left the Council Chamber just before the final vote on Mayor Tyler’s sports arena concoction. So, the final vote was 6-0 against (Tyler), with Bowman skedaddling.

Also new, bizarre and outrageous to the January 2nd meeting, attendees were required to stand and identify themselves for the record … in a public meeting … doing the public’s business.

So much for the First Amendment right to freedom of assembly without government interference.

Finally, the meeting was (still) run by ex-Mayor Glover’s close friend, David Aubrey … the nine-year chairperson of this official cabal.

According to City Charter law, Aubrey and other citizen appointees to the A & E Committee are permitted to serve either one year to two. (SEE article #6 below, and City Charter, Sec. 26-243 (e) (2.))

Too, Aubrey does not even live in Shreveport. For two years, he has been a legal resident of St. Gabriel, Louisiana, working in Baton Rouge. (SEE article #6, below.)

Thus, with violations of municipal law screaming, Mayor Tyler preserves the A & E Committee precisely as ex-Mayor Glover – or a third person close to both of them – rigged it years ago.

By email, two days ago, I asked Councilman Flurry his plans, to which he responded …

… “Plan to have on Feb meeting agenda.”

Depending on the content of his proposal, it may well be time for us to give Mr. Flurry the public support he – and Shreveport – need and deserve.