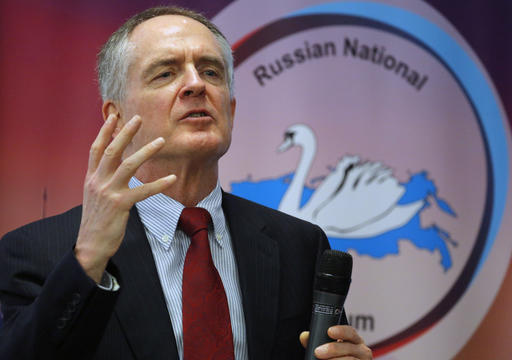 BATON ROUGE, La. (AP) — The federal government has allowed four groups at the forefront of the white nationalist movement to register as charities and raise more than $7.8 million in tax-deductible donations over the past decade, according to an Associated Press review.

Already emboldened by Donald Trump’s popularity, group leaders say they hope the president-elect’s victory helps them raise even more money and gives them a larger platform for spreading their ideology.

With benevolent-sounding names such as the National Policy Institute and New Century Foundation, the tax-exempt groups present themselves as educational organizations and use donors’ money to pay for websites, books and conferences to further their ideology. The money also has personally compensated leaders of the four groups.

New Century Foundation head Jared Taylor said his group raises money for the benefit of the “white race,” a mission taxpayers are indirectly supporting with the group’s status as a 501(c)(3) nonprofit. The IRS recognized it, the Charles Martel Society, the National Policy Institute and VDare Foundation as charities more than a decade ago.

Samuel Brunson, a tax law professor at Loyola University in Chicago, noted the nonprofit status gives these groups a veneer of legitimacy and respectability.

“It should make people uncomfortable that the government is subsidizing groups that espouse values that are incompatible with most Americans,” he said.

The IRS has tried to weed out nonprofit applicants that merely spread propaganda. In 1978, the agency refused to grant tax-exempt status to the National Alliance, a neo-Nazi group that published an anti-Semitic newsletter. And in 1994, a court upheld the denial of tax-exempt status for the Nationalist Movement, a Mississippi-based white nationalist group.

Some tax experts said the IRS is still feeling the sting from conservative critics over its 2013 concession that it unfairly gave extra scrutiny to tea party groups seeking tax exemptions.

Louisiana State University law professor Philip Hackney, a former IRS attorney, said the agency receives tens of thousands of applications annually and doesn’t have the resources to scrutinize many of them.

“A lot of applications fly through,” Hackney said. “They’re looking for easy ways to sort things out and kind of give rubber stamps.”

New Century Foundation, a Virginia-based nonprofit, has raised more than $2 million since 2007 and operates the American Renaissance online magazine, which touts a philosophy that it’s “entirely normal” for whites to want to be a majority race.

“We certainly did not conceal our intentions,” Taylor said. “I think we are educational in precisely the terms that Congress defined.”

Taylor, whose tax filing says he received $65,000 in compensation in 2015, said he isn’t raising money to enrich himself or his group.

“We hold it in trust for the white race,” he said. “We take this seriously. This is not something we do for fun or profit. This is our duty to our people.”

In a 2012 article, University of Georgia business professor Alex Reed argued the IRS “can and must” revoke the New Century Foundation’s charitable status. Reed said the agency’s lax enforcement allowed other groups — including ones he labeled as white nationalist, anti-gay, anti-immigrant or Holocaust deniers — to qualify for tax breaks under the guise of operating educational organizations.

The Montana-based National Policy Institute is run by Richard Spencer, who popularized the term “alternative right” about a decade ago. The so-called alt-right is a fringe movement that has been described as a mix of racism, white nationalism and populism.

Spencer hosted a postelection conference in Washington that ended with audience members mimicking Nazi salutes after Spencer shouted, “Hail Trump, hail our people, hail victory!” Spencer has advocated for an “ethno-state” that would be a “safe space” for white people.

The group raised $568,526 between 2007 and 2014 and publishes The Occidental Quarterly. In an article last December, the journal’s editor applauded Trump’s campaign as a “game changer” for white people who oppose immigration and multiculturalism but said they “have a long way to go to really change the public discussion of race, Western culture, and Jewish influence.”

The Connecticut-based VDare Foundation is led by Peter Brimelow, founder and editor of an anti-immigration website. Brimelow, who spoke at the National Policy Institute’s conference last month, founded his nonprofit in 1999 and raised nearly $4.8 million between 2007 and 2015.

Brimelow has denied that his website is white nationalist but acknowledged it publishes works by writers who fit that description “in the sense that they aim to defend the interests of American whites.”

Brimelow received $378,418 in compensation from his nonprofit in 2007, accounting for nearly three-quarters of its total expenses that year. Brimelow says his salary that year was $170,000 and the rest reimbursed him for travel, office supplies and other expenses.

From 2010 through 2015, VDare Foundation didn’t report any compensation directly paid to Brimelow. But, starting in 2010, the nonprofit began making annual payments of up to $368,500 to Brimelow’s Happy Penguins LLC for “leased employees.” Brimelow disclosed his ownership of that company on tax returns.

Chuck McLean, a senior research fellow for the nonprofit watchdog Guidestar, said the IRS could view those “independent contractor” payments to Happy Penguins LLC as improper self-dealing unless the nonprofit can show they were “fair-market value transactions.” Brimelow says he set up that company to “protect” and pay his employees and himself.

Brimelow’s group reported modest fundraising increases for each of the past three years. He is confident that trend would continue during Trump’s administration.

“We have every reason to believe that it will,” he wrote in an email.