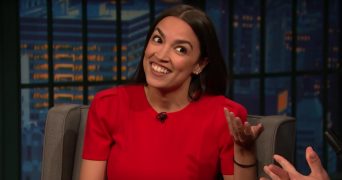 WARNING: IF YOU’RE AN A.O.C. FAN, YOU WON’T LIKE THIS PIECE

For any who have not seen or heard the latest from United States Congresswoman Alexandria Ocasio-Cortez, you missed a doozy.

AOC, as many of you may know, just decided it was a good time to attack the notion that it would be a good thing to get America going / working again, ASAP:

“When we talk about this idea of reopening society, you know, only in America does the president — when the president tweets about liberation — does he mean go back to work. When we have this discussion about going back or reopening, I think a lot people should just say ‘no’ — we’re not going back to that,” she said.

“We’re not going back to working 70-hour weeks just so that we could put food on the table and not even feel any sort of semblance of security in our lives.”

To keep this head-banger in context, let’s remember who this member of Congress is. A self-identified “Democratic Socialist,” elected to the U. S. Congress in 2018, AOC represents New York’s 14th Congressional District including Queens and a part of Bronx, her birthplace.

To boot, the Congressperson also worked for U. S. Senator Ted Kennedy during college.

Perhaps more (in)famously, she worked in the 2016 presidential campaign of Bernie Sanders.

As we consider these credentials, we are well served by also considering a few far less ballyhooed facts, especially in the context of AOC’s stated disgust with working for a living.

According to online employment sources (including search engine Indeed.com), being a bartender in the Bronx / Queens can be downright lucrative, especially for someone just out of college.

… The website includes a mind-blowing list of benefits for bartenders in Queens, from health / dental insurance to a 401/k, paid sick-leave and time off, on and on and on.

(For those who wonder, I went to work with an undergrad degree teaching adults in a public education system … for $4,800 a year … $400 a month, gross. Adjusted for inflation since 1973 when I took the job, I was paid the today-equivalent $28,100 a year, and never complained.)

Maybe it’s just me. ‘Seems AOC did pretty danged good with her college degree, even if she didn’t “put it to work” because she could easily make $100,000 a year or more bartending.

Of course, she found her way to a career – she’s betting – in politics. Four years after college, she was working for socialist Bernie Sanders’ campaign for the White House. Two years after Sanders lost, she was elected to Congress.

Now that so many Americans are sweating bullets about their jobs and their family’s lives, AOC picks a strange time to make the Socialist case for a no-work America.

I’d say she’s found American ways to do just fine … at least enough to shut-up about our now-endangered way of life.

I know! Let’s raise the money for AOC to move to any real Socialist country she prefers … perhaps China? Cuba? Iraq? Russia? …