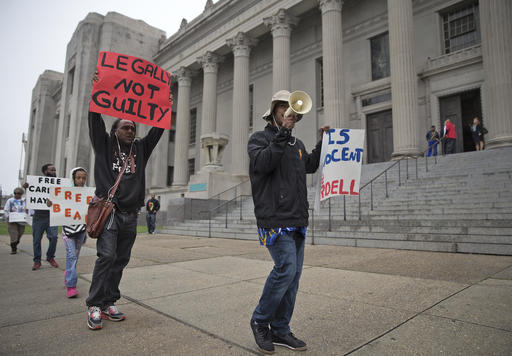 The Latest: ‘You didn’t have to do that to my baby’

NEW ORLEANS (AP) — The Latest on the second-degree murder trial of Cardell Hayes, who fatally shot former New Orleans Saints star Will Smith during a traffic dispute (all times local):

The widow of slain New Orleans Saints star Will Smith has confronted her husband’s killer, telling him as a jury looked on that “You didn’t have to do that to my baby.”

Racquel Smith then showed jurors the gunshot wounds to her legs, suffered just before her husband was killed.

Tuesday’s testimony came on the second day of the trial of Cardell Hayes, charged with murder in the death of Smith and attempted murder for shooting the NFL star’s wife.

Hayes’ defense says the Smiths were the aggressors in a confrontation following a traffic accident last April.

Raquel Smith, however, said she thought she had defused the argument and was walking with her husband away from Hayes when she heard two gunshots — the ones that hit her — followed by the series of shots that killed her husband.

It was a surprise first witness in the trial of the man who shot retired New Orleans Saints star Will Smith: Not an eyewitness or an investigator, but popular retired Saints player Deuce McAllister.

The beefy ex-running back choked up on the stand as he began to describe his years as a teammate, neighbor and friend of Smith.

The testimony Tuesday at times drew objections from defense lawyers for the shooter, Cardell Hayes. They had earlier cautioned jurors about letting Smith’s popularity sway them.

Defense lawyer John Fuller drew a concession from McAlister that he wasn’t with Smith constantly and therefore couldn’t testify that the slain star, or anyone else, was always well-behaved.

Fuller has said Hayes was in fear of his life when he shot Smith after a traffic crash.

New Orleans Saints quarterback Drew Brees is among the NFL players in a packed courtroom at the trial of the man who shot retired Saints defensive leader Will Smith.

On trial is 29-year-old Cardell Hayes. Prosecutors have charged him with second-degree murder for shooting Smith during an argument after a traffic crash on April 9.

Hayes’ attorney insists Hayes fired while in fear for his life, fearing that an angry and intoxicated Smith was reaching for a gun in the glovebox of his SUV.

A defense lawyer says the man who fatally shot retired New Orleans Saints star Will Smith last April did so in self-defense, fearing that an angry Smith was fetching a gun from his SUV’s glove box during a heated argument after a traffic accident.

Attorney Jay Daniels’ made the claim during Tuesday’s opening arguments in the second-degree murder trial of 29-year-old Cardell Hayes.

Prosecutors cast Hayes as a raging killer who purposely rammed Smith’s SUV before the shooting.

Daniels says Hayes only fired his handgun after Smith reached into the glovebox.

A prosecutor says the irony of former New Orleans Saints star Will Smith’s death is that the retired NFL defensive leader “died defenseless.”

In Tuesday’s opening arguments in the trial of Cardell Hayes, prosecutor Jason Napoli acknowledged that Smith was intoxicated the night Hayes killed him. But he stressed that Smith was unarmed when he was shot.

Hayes faces life in prison if convicted of second-degree murder.

Both men got out of their cars after Hayes’ Hummer slammed into Smith’s SUV, but Hayes’s lawyer has argued that Smith was the aggressor. Police have said there was an unfired, loaded gun in Smith’s car when he was shot last April.

In the courtroom are friends and family of both Smith and Hayes, as well as Saints players Roman Harper and Jahri Evans.

After a jury selection process that lasted well into the night, opening statements are expected in the trial of the man charged with murder after he shot retired New Orleans Saints star Will Smith.

The shots rang out during an argument that followed an April 9 traffic crash.

Hayes’s defense lawyer has cast Smith as the aggressor in the argument.

Teen wounded as he and other play with handgun