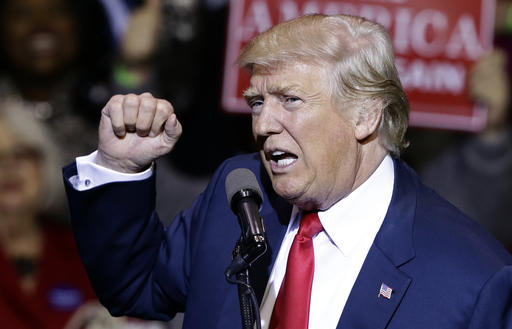 The Latest: Trump to campaign for Louisiana candidate

President-elect Donald Trump is set to campaign for the Republican candidate for Senate in Louisiana ahead of that state’s run-off election.

Transition officials said Wednesday that Trump will travel to Baton Rouge on Friday to campaign for John Kennedy.

Kennedy, the state treasurer, is facing off on Saturday against Public Service Commissioner Foster Campbell, a Democrat, for the seat of retiring Republican Sen. David Vitter.

Trump had previously tweeted his support for Kennedy.

The stop is part of a busy few days of travel for the president-elect.

On Thursday, he’ll stop at Ohio State University to visit with victims of a recent slashing attack that wounded 13 people. Later that night, he’ll hold a “thank you” tour stop in Des Moines, Iowa.

President-elect Donald Trump says he will “work something out” to help immigrants who were brought to the United States illegally as children and granted work visas by President Barack Obama.

Trump has promised to undo Obama’s executive actions, leading to fears among immigrant advocates that he would end Obama’s Deferred Action for Childhood Arrivals program.

Hundreds of thousands of young immigrants have gained work visas and temporary protection from deportation under the 2012 program.

In an interview with Time magazine, Trump said: “We’re going to work something out that’s going to make people happy and proud.”

Trump didn’t offer details, but said: “They got brought here at a very young age, they’ve worked here, they’ve gone to school here. … And they’re in never-never land because they don’t know what’s going to happen.”

President-elect Donald Trump wants Iowa’s Republican governor to be the next U.S. ambassador to China — and it looks like Terry Branstad is ready to accept the job in Beijing.

That’s the word from a senior official on Trump’s transition team. The official wasn’t authorized to publicly discuss Trump’s personnel moves and spoke on condition of anonymity.

Trump and Branstad are expected to be in Iowa on Thursday. They met Tuesday in New York at Trump Tower.

The New York Times is reporting that last week’s telephone call between President-elect Donald Trump and Taiwan’s president was the result of six months of behind-the-scenes work by former Sen. Bob Dole acting on behalf of the Taiwanese government.

The call was a breach of diplomatic protocol, and Trump advisers have made conflicting statements about whether it signaled a new policy toward China.

Dole, a former Senate Republican leader and the 1996 Republican presidential nominee, told the Times that the Taiwanese leadership is “very optimistic” because “they see a new president, a Republican, and they’d like to develop a closer relationship.”

President-elect Donald Trump is a holding a transition fundraiser in New York City.

Most donors paid $5,000 for the chance to meet with Trump at the restaurant Cipriani.

Among those listed as hosts for the breakfast fundraiser are Trump’s picks for treasury secretary, Steve Mnuchin, and for commerce secretary, Wilbur Ross.

Trump is raising money for transition and inaugural costs. On tap for later Wednesday are more meetings and interviews with potential administration hires.

Hart, a Harvard professor, told reporters in Stockholm on Wednesday that he doesn’t yet see “a coherent set of policies” from Trump. He says he’s worried about Trump’s campaign promises of “tearing up trade agreements, imposing tariffs. I don’t think that’s the way forward for the U.S or the world.”

Hart added he’s “sympathetic” to Trump’s plans for infrastructure spending but “when you look at the details of what he had in mind, those are not so impressive.”

Time magazine has named President-elect Donald Trump its Person of the Year.

In a telephone interview on NBC’s “Today” show, Trump called it “a great honor.”

The Time cover reads, “Donald Trump: President of the Divided States of America” and the cover image features a photograph of the president-elect sitting in his private residence at Trump Tower.

In the NBC interview, Trump took issue with the “Divided States of America” description: “I didn’t divide ’em,” he said. “We’re going to put it back together and we’re going to have a country that’s very well-healed.”

Teen wounded as he and other play with handgun

Part 1: HONEST CADDOANS TAKE OUR CASE AND HOPE TO A HIGHER COURT