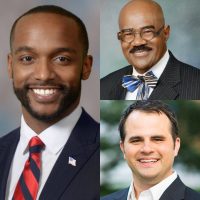 It was, yes, painful to watch … but with a couple of pleasant surprises … and a couple of notable lows.

A close second, though, was the Council’s telegraphed sanction of Perkins for switching some city insurance business without any prior notification or due diligence …

… to the first cousin of his campaign manager …

… the day before the mayor was even the mayor.

Along the way, some City Council members, four of whom are newly elected along with Perkins, displayed awareness that they have more to learn before passing any additional revenue.

Yes, the garbage tax Perkins began hawking way too soon to know what the crud he was doing is still alive, but was postponed for another two weeks.

Perkins’ nutty opening gambit of an $18-a-month taxpayer hit has now fallen through its rotted “support” … to and through Councilman John Nickelson’s $13-a-month, and Councilman James Green’s $7-a-month.

Whatever hope there is for sanity – that is, new City Council members realizing they cannot possibly yet know what budget-scrubbing must first be done – rests in the fact that four members – Levette Fuller, Grayson Boucher, James Flurry and Willie Bradford – did not sound in the Perkins bag this evening.

On the other side, Council Chairman Jerry Bowman, Jr., and James Green seem Perkins guys, do or die.

Most dramatically, Councilman John Nickelson is willing to walk the political plank to raise our taxes … no matter what … Republican or not … no matter how inarguably inexperienced in city government.

To prove how sanitation workers are being used, Team Perkins confirmed tonight that their subject payraises – supposedly the REAL issue for Perkins (what a crock!) – would cost taxpayers $400,000 per year …

No matter what Perkins says, it is clear to me that we have no clue – NONE – what he really intends to do with the money. His use of these sanitation workers is shameful. He gives himself away by fighting against any of that money being protected in a lock-box Enterprise Fund.

The City Council also passed Ordinance No. 18 of 2019 to prevent any mayor from acting in the now-infamous “insurance switch” as Perkins did on December 28th … the day before he was inaugurated.

The vote was 5-2 in favor of the sanction, with only Councilmen Bowman and Green siding with Perkins. (I thank Gerry May of KTBS for his reporting yesterday on this subject … SEE link below.)

AND THEN THERE WERE THESE

I do not know her Councilwoman Levette Fuller, but was impressed with her comments urging the Council to view the garbage tax / fee with real regard for how many moving parts (my words) are at issue. She not only stressed transparency – and obviously honestly – but urged fellow members to see a much larger picture than the obvious.

Councilman John Nickelson not only proved he demands – demands! – new revenue for city coffers no matter what, but also slapped those of us here as inhabitants of the “social media peanut gallery.” He did it with the opposite of a smile or even smirk … he was insulting.