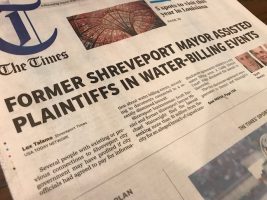 The Shreveport Times devotes much of its news space in this morning’s print edition to the sprawling corruption in Shreveport City Hall.

If the F.B.I. and other feds needed any further nudging, this article provides it. This is not a report to be missed by anyone who cares about Shreveport.

Focused on City Hall’s water-underbilling scandal, reporter Lex Talamo spreads deep detail over one entire page and parts of two others. The bold headline above the fold reads:

While the article does, in fact, include details about 1998-2006 Shreveport Mayor Keith Hightower, it also mentions the involvement of those in the 2006-2014 double-term of Mayor Cedric Glover and the current administration of Mayor Ollie Tyler.

The Times report clearly intends the article to focus public attention on Keith Hightower, along with Michael Wainwright and Scott Pernici.

The three are well-known among locals who care as major political players over recent decades, often as a trio. Their 2016 lawsuit against the City of Shreveport over water service under-billing triggered the subject events and investigation.

Armed with information about the systemic and gross water under-billing, Pernici and Wainwright approached the city in 2015 to provide professional services – through Manchac Consulting, headed by Justin Haydel – necessary to fix the web of problems.

The Times focuses attention in its article on a “revenue enhancement agreement” involving Pernici, Wainwright, Hightower and Charles Grubb which would divvy-up payments from the city flowing to Manchac.

Justin Haydel, deposed in the subject lawsuit against the city, says he was to get 30% of the payola, local attorney Charles Grubb 25%, and the remaining 45% split among Pernici, Wainwright and Hightower.

Among the article’s many additional red flags waved at the F.B.I. are details about Glover-Tyler mega-player Lynn Braggs, including the (corrupt) use of the city’s Architect & Engineering Committee about which I have in recent months written in detail.

To date, Mayor Ollie Tyler has refused to take any action to end the A & E Committee and its wide-open corrupt practices.

Not only is the Committee’s long-time chairman, David Aubrey, very, very close to ex-Mayor Glover, he is a legal resident of St. Gabriel, Louisiana, and works in nearby Baton Rouge.

The Times article features Lynn Braggs as the recipient of various payments of city money which trace to contracts doled out in the A & E Committee.

Ms. Talamo’s report also points out that, among other such City Hall relationships, Lynn Braggs is married to Tyler’s “niece-in-law,” and is identified as a “mentor” of Shreveport City Attorney William Bradford.

The Times reports that Braggs was paid $80,000 by Manchac Consulting (with Justin Haydel on point for the company) in 2015 alone, and was on the Manchac payroll at one point as a “marketing employee.”

As has long been so, The Times article says very little about the role in the matter of ex-Mayor Glover. Such is all the more notable because Glover veritably sponsored the infamous Triton contract of $7.5 million for electronic water meters.

Though Triton and other players received their parts of taxpayers’ millions, Glover never bothered to actually get the meters installed.

EDITOR’S UPDATE: The Shreveport Times has published, one day later, the article referenced online.  The link is HERE.