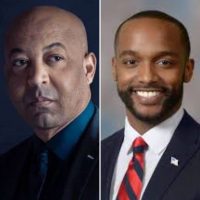 With official qualifying – July 18-20 – a mere week away, here are notes of interest …

The long-time investigator with the Shreveport Police Department and Caddo Parish District Attorney is actively rethinking his initial decision not to run for mayor.

Demery’s election chances continue to improve because (a) local criminals are taking over huge segments of the city, (b) they show ever-increasing comfort with property crimes in the supposed “safest” of neighborhoods, and (c) Mayor Ollie Tyler and her police chief steadfastly refuse to take any demonstrated, extraordinary action in response.

As if straight from central casting in the role of the “right man at the right time,” the star of cable television’s “Murder Chose Me” series knows enough about local criminals (and related politics) to impress both the gangstas and many of the rest of us.

Far less impressed are local politicians, especially those in any way responsible for enforcing the law, much less imprisoning criminals.

A candidate line-up with Demery included is much different than any without him.

Both black and a lifetime Republican – a mega-rarity in our neck of the American woods – his chances of being elected mayor count on who else actually, officially makes it into the race.

Any candidate able to compete among both blacks and whites has a real shot for one of the expected run-off spots.

In the wake of the alleged wunderkind’s rumored break-up with sponsor and father-in-law-to-be Louisiana Senator Greg Tarver, Perkins’ campaign is wrapped in even greater doubt.

Good sources now tell me the split seems real, and the reason traces to Perkins’ reportedly failed relationship with Senator Tarver’s daughter. That the rumored break-up traces to certain aspects of the mayor’s race makes it all the more important.

That being said, a notable truth is that Perkins needs the Senator, perhaps enough to put the reputedly failed relationship back in order.

On another front, whether or not Perkins, if elected, can count on Shreveport City Councilman Oliver Jenkins to be his Chief Administrative Office (CAO) is anything but certain. It seems clear at this point that the Councilman may not yet know important facts of Perkins’ biography – even including the few parts of it available in the public record.

Perhaps more to the immediate point, Jenkins seems to have serious problems explaining how his Republican Party affiliation in any way matches-up with the young man referred to (when it helps) as “the next Barack Obama.”