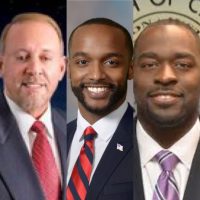 The first phase in official candidate qualifying for Shreveport mayor ended yesterday. Now we wait through next week to see if any legal challenges are filed.

Ten candidates paid their fees, then filled-in and signed a Notice of Candidacy …

The Notice of Candidacy candidates must sign (SEE link below) includes a list of statements meant to insure they are who they say, are not hiding anything, and are “knowledgeable of the laws governing election offenses.”

Louisiana law – R.S. 18:464 – specifies that, “… no changes to the information contained in a notice of candidacy shall be made after the close of qualifying” (yesterday).

The would-be qualifier signs just after reading this final line: “All the statements contained herein are true and correct.”

The Secretary of State notes, “… you may be criminally charged for executing an affidavit knowing it to contain false or incorrect information.”

In Shreveport’s subject ordinance – Section 5.01. Qualifications of mayor – the bar is now set exceptionally low: “… the mayor shall be a qualified elector and a resident of the City of Shreveport.” The state says / interprets “qualified elector” to be “registered voter.”

Notably, as seen in the form, the second line the candidate must fill-in is DOMICILE Address.

Here and elsewhere in the world, “domicile” is defined as “the place where a person lives.”

So, with all of this filling-in, swearing, and signing in mind, consider the following notable facts from and about three of the would-be mayoral candidates:

As confirmed by records and other assertions by state and local sources and officials, Perkins registered on April 18, 2007, but has never voted in Shreveport / Caddo, in-person or absentee …

… correct, never … not even once in the eleven years since registration.

According to parish Tax Assessor records, the domicile (address) provided by Perkins is the Southeast Shreveport home of a relative.

Why? Doing so necessarily means something is knowingly and deliberately being hidden … the precise opposite of what the form is specifically designed to do.

A tip-off is a domicile address for Jackson shown by one source of registration records … the 7000 block of Youree Drive in Shreveport, near Bert Kouns Loop. That is far south of Jackson’s Caddo Commission district … within which trusted sources confirm he has not been living.