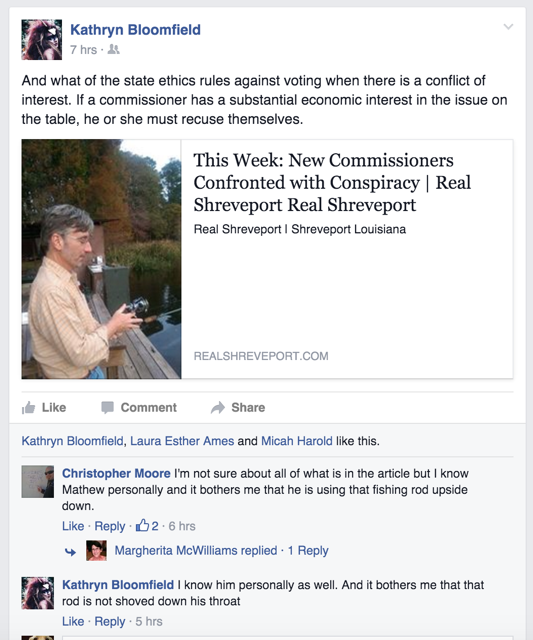 Caddo Commissioner Matthew Linn reported that he was the target of “bodily harm” due to this website. He wrote in an email (copied below) to Caddo Sheriff Steve Prator that he wanted a peace bond placed against local attorney, Kathryn Bloomfield, for her off color comment about about a picture of him with a fishing rod.

Upon Linn’s request (while invoking his title as Caddo Parish Commissioner), the Sheriff promptly dispatched a detective to reach out to Bloomfield. Bloomfield, a single woman, scared Linn because her “role as a public defender she is in constant contact with people who may feel they owe her a favor for her representation in court.” Bloomfield works in Caddo Parish as an indigent defender.

Caddo Parish taxpayers are reminded that the Sheriff has yet to turn over any sort of investigation of Commissioner Linn, or the rest of the Caddo Commissioners, for their involvement in the self-pay scandal that Elliott Stonecipher exposed last year. The Sheriff has been asked numerous times to investigate the Commissioners for criminal malfeasance, and was even given a copy of the Louisiana Legislative Auditor’s report that stated Commissioners likely broke the law as it pertains to their self-appointed retirement benefits. In spite of these pleadings, Sheriff Prator has plodded along doing nothing, while at least allowing Linn to appear like he has some level of authority over Prator by inducing the initial investigation of Bloomfield. Prator likely could not have felt the facebook comment was a real threat to the new President of the Caddo Commission.

The people of Caddo Parish would also be well reminded that Linn has no substantive basis to feel any fear. He isn’t the subject of an investigation, and there is no recent incident of a public official being in danger of any retribution for public corruption. To the contrary, a similar case of public corruption was exposed when Jim Leslie went public with the fact that then public safety Commissioner, George D’Artois, was involved in self-enrichment in 1976. Leslie was killed by a hitman, and no local authorities ever remotely came close to bringing anyone to justice for their involvement in the killing, even though D’Artois had made an actual threat against Leslie weeks before his murder.

Read below to see the report from the detective, and the original complaint from Linn.

Larry, look at this and see what you think. Thanks. Steve

Sent from my iPhone

As a side effect of RealShreveport.com articles I have been targeted for bodily harm by Kathryn Bloomfield. The threat -shown as an attachment- made by Kathryn Bloomfield would not be as bothersome if she did not work as an attorney for the Public Defender’s Office/Caddo Parish. In her role as a public defender she is in constant contact with people who may feel they owe her a favor for her representation of them in court.

Kathryn Bloomfield and I have long ago blocked each other on social media due to her posting untruths about me and most elected officials. This screen shot was sent to me by a person who thought the threat may be of interest to me. It has been posted on Kathryn Bloomfield’s (Facebook) page for all to read, seven hours as I type this letter. My only concern is that someone she represents may want to do her a favor. The hate she spews is boil over from Elliot Stonecipher and Will Broyles publishing half truths.

Are you able to assist me in placing a peace bond against her so that she no longer prints my name? Will you contact her and request she remove the threat? Will you contact her office to discuss how unprofessional this post is as a representation of the Caddo Parish Public Defender’s Office?

Thank you for your time and assistance in this matter.

Bloomfield became very angry. She referred to him as a “whining little pussy”. She accused Sheriff Prator of doing Matthew Linn’s dirty work. She felt she was being threatened. She felt her federal and state rights were being violated. She felt like Linn as using his power to silence her.

She said she was terrified of Sheriff Steve Prator and was concerned he was involved.

Bloomfield, who is a lawyer, made it clear that Linn is an elected official and she can crticize him. She further stated the post was not a threat and doesn’t qualify as criminal. I could not find any statue [statute] that it would qualify it as a criminal offense prior to the call.

I informed her no one is threatening her and the call was an attempt to keep the issue/dispute from escalating in the future.

Bloomfield said that Linn has made derogatory remarks about her face to face in the past. She believed he is committing criminal acts as a commissioner.

She wanted copies of all e-mails concerning this issue with Matthew Linn.

She calmed down after a while, but still said she would be calling her lawyer before hanging up.