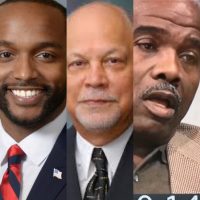 As I can personally attest, the buzz surrounding the mayoral candidacy of Adrian Perkins has been intense from the jump. Now, with first official campaign finance reports available for viewing online (SEE link below), the buzz is confirmed.

Perkins has raised more money than any other candidate between March 1st of this year and September 27th: $132,004. Runner-up is Mayor Ollie Tyler with contributions of $120,325.

It is true, of course, that money is the mother’s milk of politics, but that flow has been sharply unimpressive in this campaign.

Savage has (personally) loaned his campaign another $21,247.

Perkins, a 32-year-old supposed “next Barak Obama” is notable, according to my research of official voter registration records, for never before having voted in any election.

He is the new face of the political machine of State Senator Greg Tarver and an assortment of several-decades political players associated with former Governor Edwin Edwards.

Braggs with Tarver-Perkins is a highly unlikely marriage given various highlights of their histories, so hope springs eternal that the feds are somehow at play in that alliance.

Be that as it may, the Republican Party’s game of having two candidates in the race – Taliaferro and Savage – looks in this reporting to be as self-defeating as many observers have predicted from the very beginning.

Here in the real world, the most notable race can now be said to be Tyler vs. Perkins, highlighting the chance of a run-off between the two black Democrat candidates.

What is outlined in this campaign finance reporting for Taliferro, Savage and Caddo Commissioner Steven Jackson is anything but positive.

Too, the rumored white support for Perkins bodes poorly not only for the Republicans, but also for Tyler. Much of that same (white) campaign money and other support was hers in 2014.

More broadly, as I wrote about in August (SEE link below), it is likewise notable that Tyler’s fund-raising and spending is far below what she accomplished in that 2014 win.

Sadly, all said, these numbers confirm just how little interest there is in this race … and office.