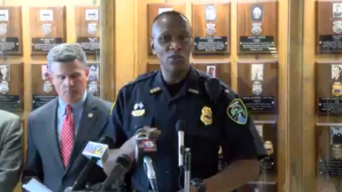 Most of Shreveport got the news this week that Shreveport Police Department Chief Alan Crump was cleared to return to work after his gun was fired in response to a response to criminal activity (KTBS article here).  Now, new information is leaking out that calls into question whether the whole unfortunate incident might come back to bite Ollie Tyler’s administration.

Now that the incident has been cleared by the District Attorney’s office, sources extremely close to the situation are coming forward to claim that a needless coverup took place surrounding the whole investigation into Crump.

As my source has informed me, there is very clear video evidence of the entire incident from one, maybe two cameras at the scene.  According to this source, the cameras show Crump unintentionally firing his weapon and dropping it on the ground.  The source claims that in the immediate aftermath of the incident, Crump was asked to take a drug screen… a normal procedure… and then Crump initially refused for around twenty minutes to submit to a drug test at the specific request of City Chief Administrative Officer Brian Crawford who wanted him to wait til Crawford arrived at police headquarters.

This source went on the further claim that when Crawford arrived, he pulled Crump and SPD Deputy Chief Bill Goodin into another location, leaving the investigations division, to meet for roughly 2.5 hours prior to Crump being interviewed by investigators.  From there, it is alleged that Crump described himself as intentionally firing by shooting AT the suspect in the official statement.  I’m told that the video evidence at the scene shows Crump appearing to unintentionally fire the weapon and will contradict Crump’s official statement.  Many in SPD are saying that they believe Crump and Crawford were afraid he would look inept if he told the truth and decided to coverup his unintentional firing.

Further the source claims, the District Attorney James Stewart took exception to the obvious mismatch in evidence versus Crump’s statement and called a meeting with Mayor Tyler and Chief Crump, where he insisted Ollie Tyler view the video and the statement for herself.  Mayor Tyler apparently refused the DA’s suggestion.  It is anticipated that the DA’s office will release the video and statement very soon.  Many inside SPD are expressing their upset over a needless deception was employed by Crump, Crawford and Tyler in the alleged coverup and do not want the public stain that this potentially damaging lie might bring.  Stay tuned for more info.

UPDATE: Video footage was released.  KTBS’s Shon Gables did good work with the video and statements.  As it now appears, the effort to keep up the apparent facade of the story gets deeper as City Attorney William Bradford claims Crump dropped his cell phone, not his gun (more on that later).  See more of the story here.