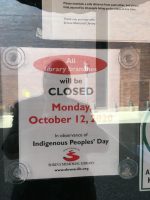 Yes, it is true: Caddo Parish libraries will close this coming Monday, no surprise since President Roosevelt, in 1937, set aside the second Monday in October as “Columbus Day.”

‘Problem is, our Shreve Memorial Library system is not shutting down for Columbus Day, they are all taking off at our expense for …

… Indigenous Peoples’ Day … no matter how few taxpayers have ever even heard of it.

Notable, too, is that City of Shreveport, Caddo Parish Commission and State of Louisiana folks are doing NO such thing.

First heard of in the 1980s and much more so the 1990s, the original effort to legitimately honor American Indians and Alaskan Natives has morphed into a political-left partisan push.

Now, a hundred or so American cities, to one degree or another, also specially mark the day. Many of these are clearly locales where such honoring makes perfect historical / social sense.

That Columbus Day is on life-support is not the issue, at all.

Regardless, the second Monday in October is not “Indigenous Peoples Day” in America. It is not an appropriate excuse to take a holiday on taxpayer dollars …

… but don’t bother telling our Shreveport Memorial Library bosses that.

Here, by way of compelling population-count evidence, is how stupefying and wrong this is.

By U. S. Census Bureau measurement, the indigenous people of America – AMERICAN INDIANS and ALASKA NATIVES – numbered only 5.2 million of the 309.3 million total population in the last, 2010 Census … 1.7% of all Americans. (SEE Census Bureau link below.)

And, the IWGIA – International Work Group for Indigenous Affairs – in no way tries to hide (even on its website) that the count is now 6.6 million, still only 2.0% of the U. S. population.

All of which leaves this fine and ending stunner.

According to the (latest) 2019 U. S. Census Bureau Population Estimates, this is how few of us here are indigenous peoples …

Put another way, in Caddo Parish there are …

… 100-times as many black residents as indigenous peoples (50.0% of the parish population),

Our only smaller group are “Native Hawaiian and Other Pacific Islanders.”

TO WE WHO CARE:

In that same period, Caddo Parish has lost -12,154 residents, a now accelerating decline.