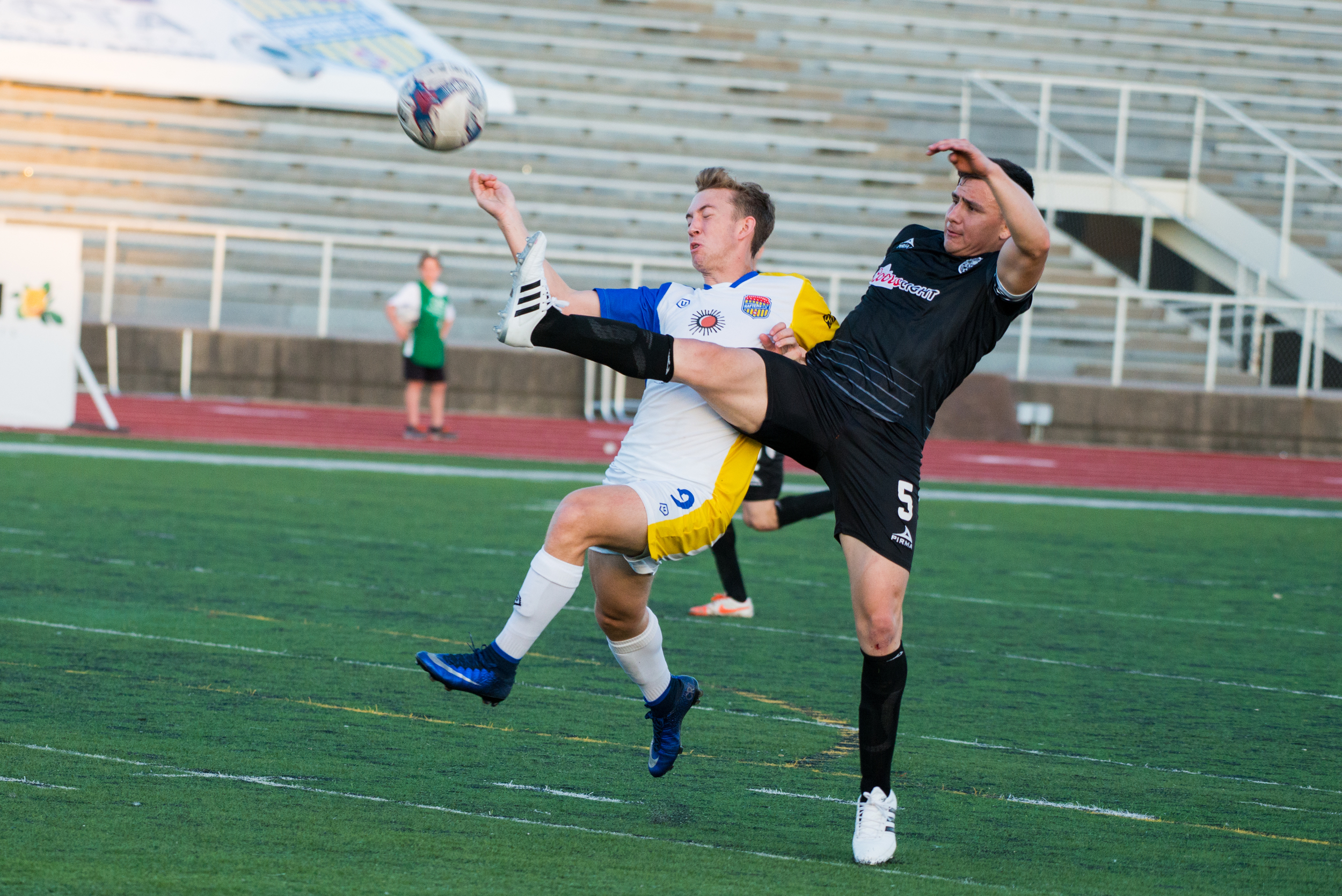 Rafters Remain Undefeated at Home with Win Over Regals!

A team is often defined by how well they are able to come back after a poor result. Teams that respond with resiliency are usually the teams to fear. This can be said about the Shreveport Rafters on two accounts as they responded well after their first ever defeat and an early concession in their second conference game against the Houston Regals.

With the schedule not favoring the Rafters playing their 3rd game in only 7 days, Coach Greg fielded a side that has put in quality performances in its first three games.

At the start of the game the Rafters stayed their usually high line, 45 yards from goal that allowed the midfield to muddy up the middle of the pitch as every ball touched by the Regals was contested.

With not much room to knock the ball about, the Regals were forced to play long through balls to their forwards. Vested center halves Gary McCormick and Sean French had much success early on making life simple for goal keeper Lance Quini as he mopped up balls that came close to his 18-yard box.

Much of the Rafters attack started from the back as it has become a routine operation to get the fullbacks involved in setting up plays for the midfielders and forwards.

The Rafters had an early chance inside 6 minutes, on the left side, as attacking midfielder Kyle Symczak intercepted a Regal pass who slotted a direct through ball to Matt Barcelona. Barcelona laid off the ball for left back Munir Poca who darted up the wing and produced a cross that just missed forward Steven Bush far post.

Shortly after Poca would be a repeat offender as he would find space again in the Regals defensive third. Calling him a left back would almost be understating his attacking prowess as he was able to dribble past two defenders and supply another cross from the left side.

The first ten minutes the Rafters seemed to be evenly matched with the Regals while the home team had more opportunities in front of goal- primarily from aerial attacks.

Right back Andre Anasi would make a great intercepting tackle after a Regal midfielder looked to his left to nearly loft a ball to the winger making a run inside the 18. Anasi initiated the counter as he found right winger Aaron Bergman who put his pass on the right side of Steven Bush. Bush quickly ripped off a right foot shot and from a crowd’s perspective had found the inside of the goal but upon further examination, found the outside of the net.

In the 21st minute the Regals would find a crease between the Rafters center backs as the forward was able to get a point blank shot off that Quini was able to react to immediately but the absolution wouldn’t last long as the ball was rebounded to the Regals and were able to hit the ball into an open net.

The concession was unfortunate as the Rafters looked to be the team that would score first with near misses and hitting the woodwork only minutes prior. A goal down didn’t seem to shake the team as they resumed staying aggressive on the attack.

In the 40th minute defensive mid Mark Hammond touched a rebounded ball pass the defender that freed him for a blocked shot on goal 19 yards away. M. Hammond received the ball again, this time inside the 18 as he was able to position himself for another shot but was fouled. The referee called the initial foul outside the box but Hammond was fouled on the second shot inside the 18. The close free kick attempt would be just missed by designated set piece taker, Kyle Symczak.

The Rafters would go into half time down 0-1. The Gold and Blue produced great opportunities but couldn’t capitalize.

The second half might be arguably the best half the Rafters have ever played- as attack and defense were spot on.

“[At halftime] The game plan never changed, all it was for me was motivating the players to get after the ball, press higher up the field, having energy and intensity is the key to the way we play.”, said Coach Palmer

And the Rafters did just that.

The increased intensity in the pressure was evident as the Rafters were apt to intercept passes from the Regals; the home team made counter attacks for opposition the only option.

In the 51st minute, 30 yards away Anasi was reading a pass that he intercepted in the Regals’ defensive third. This spearheaded the poking and prodding on the right hand side as the Rafters continued to find outlets to passes in an imaginary 20-yard box, still searching for their first goal of the match.

Some purists don’t believe in goal line technology because it takes away from the human element of the game and even at this level of football it might be too difficult to come by. But hypothetically speaking, I’m confident if we had reviews available it would have shown the Rafters scored in the 53rd minute.

Posted up on the back of a Regal defender, Nick Hammond received a ball from Symczak as he gathered himself and the ball for turn and shoot opportunity. The Ball bounced off the keeper [and into the goal] but was disallowed by the linesman as the Rafters players did there best to contest the head scratching call. While it was a missed opportunity, it would not prove to be detrimental to the outcome of the game.

An identical play occurred along the right side as Bush was able to skid a pass that found its way past three Regal defenders again to his partner N. Hammond. N. Hammond turned on a dime to get good power on left foot strike that went a finger nail length over the cross bar for his second near-goal only a couple minutes apart.

At this point the Rafters had taken firm control of the game and set up shop in the Regals defensive third as they passed about; also acquiring corner kicks. An hour of football played, the Rafters were still down 0-1 but were bursting at the seams for a goal.

In the 69th minute, Symczak stood over the right corner flag to take yet another corner kick attempt. He kicked the ball missing seemingly every player outside the 6-yard box. But it only takes one. Matt Barcelona climbed the ladder from the far post to find the curling corner kick and fired the ball into the top left corner, a shot that had no chance of being saved.

Even before the goal the Rafters had established dominance in every aspect of the game and that didn’t change as subs were brought on. It was as though the goal the galvanized the team- knowing they could get another for the win.

It looked as though the Rafters would get two unanswered goals back to back in the 80th minute as substitute Luiz Petribu found himself in a one-on-one chance with the Regals keeper. The opposing goal stopper was up to the task as he just managed to save the forward’s shot to his right keeping game knotted up.

It’s rare that a referee calls a foul inside the box on a corner but when a player’s heads snaps back from being pushed in the back, you make it an easy call.

In the 83rd minute Bryce Childers was pushed in the back which was visible 50 yards away as the referee pointed to the spot for a chance at a 2-1 lead.

Center half Gary McCormick, stood with zero nerves and as cool as a cumber- rocketed the ball to the right post giving his team a late one goal advantage that had been well deserved.

The tale of the second half was a team that understood the moment and rather than throwing men forward in hopes of a goal, they remained confident in their abilities and kept the shape- trusting the result would come.

It was an eye-catching performance for the Rafters as they remained undefeated at home. Rafters win 2-1.

In their inaugural season the Rafters currently sit atop the South Central Conference with the maximum 6 points. http://npsl.bonzidev.com/sam/standings/ss/schedule.php?v=3&divisionID=MjA5MzQ=

The Rafters get 7 days of preparation as they take on the Tulsa Athletics- May 21st at 7pm Graf Orthodontics @ Lee Hedges present by Ivan Smith Furniture.