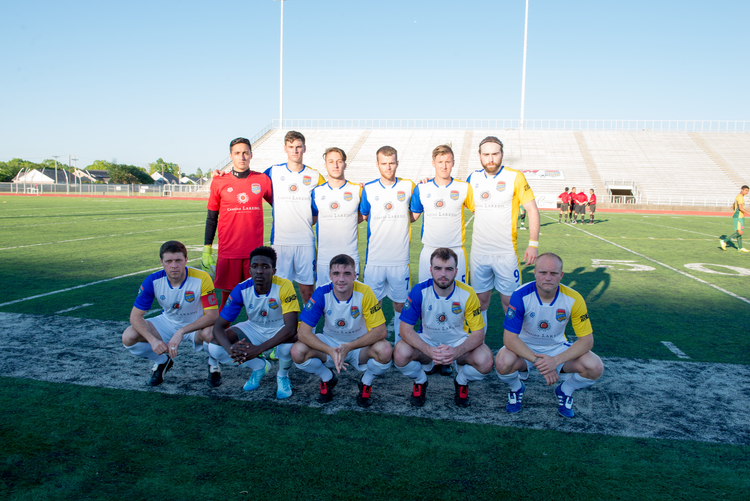 Rafters put Shreveport on the map with huge 2-1 win over Tulsa!

Saturday night, in front of a crowd that has become familiar with supporting their Shreveport based club, the Rafters took on the Tulsa Athletics of Oklahoma.

With an outstanding result against the Houston Regals last week in the books, the Rafters coaching staff rolled out a starting 11 with only one change at forward. Bryce Childers getting the nod to be the partner of Steven Bush as they lead atop the Rafters 4-1-3-2 formation.

It was evident at the beginning of the match that the A’s were caught off guard by the home team’s press. The Rafters kept their opponents in side their half and minimalized their time on the ball. Without much of the ball in the first 7 minutes the Rafters dictated the tempo of the game and made the space inside the defensive second of the A’s the battle ground.

“The first five-ten minutes we came out pretty strong. Our focus was going forward quickly but if we were to lose [the ball] find our shape and don’t make any unforced errors essentially,” said Coach Reichl.

The first chance for the Rafters came quickly in the 3rd minute as Bush recovered the ball on the left side at midfield and with his first touch immediately played the ball to a running Childers. Childers brushed off the slide tackle of the defender and darted towards goal but was unlucky as the right footed place shot was saved by a brave attempt of the Athletics keeper to meet Childers 16 yards from goal.

The four at the back could easily be seen as a 3 at the back for the A’s, as number 22 Jordan Poarch stayed wide to the left touchline near midfield. This is where much of the attack came from as the A’s sought to get one-v-one chances with either fullback Munir Poca(left) and Andre Anasi(right). The Rafters narrow midfield gave the A’s space out wide but that space was always quick to be inhabited as Aaron Bergman or Matt Barcelona would come to help defensive mid Mark Hammond on either flank.

The A’s first go-ahead attempt was made in the 16th minute as forward Damieon Thomas received a grounded pass from the left; the quick turn and shoot was stymied as goal keeper Lance Quini leapt to his right to keep his net clear. Thomas would prove to be a forward that would need much attention as center halves Gary McCormick and Sean French would have to win the ball in the air to keep his chances at bay.

Around the 30th minute the Rafters back line had to remain composed as the A’s began to get a foothold in the Rafter’s defensive third. The A’s took 8 shots and eased out the Rafters in possession but if there’s one thing through 4 matches that we’ve learned, this team relishes at the opportunity in putting on a show in the second half.

A couple minutes after the start of the second half the Rafters showed they wanted to settle into their style of attacking play with left back Poca getting forward. Bush freed himself with a fake that allowed him time to send an air ball to Poca who was making an overlapping run. Knowing he was beat, the defender fouled him right outside the left of the 18-yard box setting up a great opportunity for a close range good angle free kick.

The Rafters have put together a catalogue of great set pieces so far this season and tonight was no different. The feel of the game and where to be is just as important as your skill with the ball. In the 53rd minute Munir Poca stood 40 yards away from goal to take a free kick near the center half circle. The ball was launched toward the left of goal and a poor clearance granted right midfielder, Aaron Bergman, a chance at a half volley. Bergman was up to the task as he steered his laces into the shot sending the ball to the keepers right, far post. Rafters open the scoring making the game 1-0.

With just three minutes of being able to take in the Bergman goal the Rafters would be back in stellar attacking fashion. In the 56th minute, Poca, instrumental as always, engineered a quick counter attack as he gathered a poor pass to the right back of the A’s. He poked the ball around the back swiftly taking twenty yards of real estate. With a right foot cross he looped the ball around forward Bush and one A’s defender to find Childers who was making the trailing run back side. Childers unselfishly sent a grounded pass in the box for Bush who readjusted his run in the box to get the ball and have a go. Bush spotted the keeper and an incoming defender and calmly passed his shot towards goal as it rolled in the net touching an A’s defender on the way in. Rafters double their lead, 2-0.

“Munir won the ball- came in behind- He played the ball to Bryce and Bryce was very unselfish and laid the ball across to me to get the goal and it was just a great team goal,” said Bush.

The Rafters kept cool heads on counter attacks after the great build up goal. Being able to pick passes on while running full speed would mire the A’s in many defensive stands. Late in the game it was also evident the fitness level of the Rafters as the everyone was able to man their post and complete their expected roll in the waning minutes of the game.

“Our goal was to be the most fit team in the conference and I feel like we have been every game in the second half- we’ve run teams in to the ground [with our fitness],”said Bush.

In the 75th minute the Rafters would concede as the A’s Damieon Thomas attempted to chip keeper Quini. The keeper got a good hand to the ball but with a chance similar to last week’s, the rebound fell to the trailing runner of the A’s as he kicked the ball into an open net. Score 2-1.

The away goal would not overshadow the fantastic performance the Rafters would put on in the second half as they went from 3 shots in the first half to 13 in the second. They continued to be dominant on set pieces as substitute center half, Abdullah Rayyan would raise over the crowd in the box and with a vicious header sent the ball just over the top left corner of goal.

Although the A’s would press high up the pitch that did not mean the Rafters were content to sit back and protect the lead as they still stayed very much in an attack state of play looking to extend their lead.

“The second half was a total team effort, we played aggressive, we pressed, we kept our shape, we dictated the game to them in the second half. We told our outside backs to put pressure on them,” said Coach Stults.

In the 89th minute substitute Luiz Petribu would have a one-v-one chance against his defender on the left hand side. In the box, Petribu would display his fine dribbling skills as he shook the defender twice in the box to take a curling shot that the keeper was able to handle.

Four minutes of stoppage time would be to the dismay of the crowd knowing both teams were going tit- for-tat in attacking opportunities. But again, the Rafters would prevail and stand strong in the final minutes maintaining the one goal lead until the final whistle.

The talk of better teams traveling to Shreveport is quickly being diminished with each performance as the Rafters are making a name for themselves as an elite team in the conference.