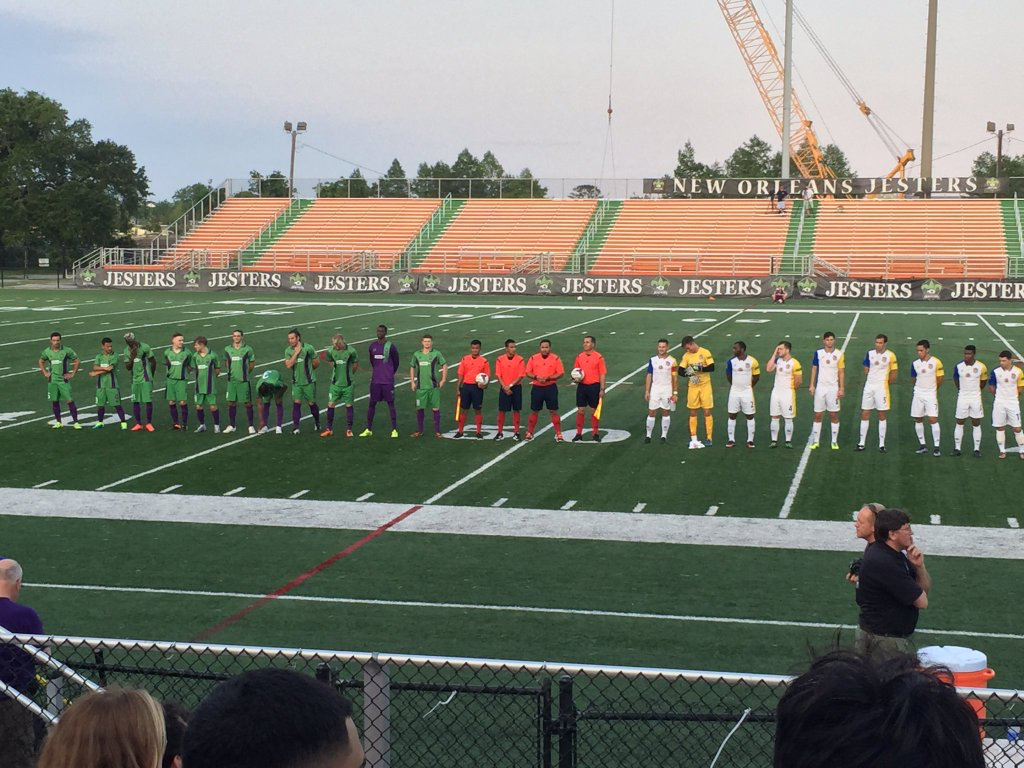 Rafters fall to NOLA 2-0 for first defeat, Houston next up.

Depending on what side of the pond you’re on its called a rivalry or derby. Whether it be a previous encounter or someone encroaching on what you claim to be yours, you want to beat them. For the Shreveport Rafters it was the latter as they traveled for an in-state clash against the Jesters of New Orleans for the battle of Louisiana.

On this mild spring night the Rafters brought many new faces with fresh legs as the team had its first in- conference win only 3 days prior.

“We took a lot of new guys, some that were on the verge of our [first] squad that deserved the chance to play”, said Coach Palmer.

With much success in previous games, naturally the Rafters trotted out again in their 4-1-3-2 formations. The back line saw the most changes with center halves, Rob Watson and Patrick Fox while Che Walcott(left) and Xavier Scarlett(right) took their positions at fullback. Dave Dessources linked the mid field and defense as he saw his debut at defensive mid. Jesus Hernandez(right) and Russell Alvarez(left) manned the wings as familiar face Kyle Symczak led the attack from midfield. The two at the top of the formation were forwards Brett Barker and Bryce Childers.

Within the first 5 minutes, unfamiliar surroundings seemed to be the enemy of the Rafters as the squad struggled to gain possession with the Jesters being comfortable taking on the away team and looking for one-two passes on the flanks.

The Rafters found a sliver of daylight on the offensive in the 6th minute as Scarlett cleared a ball that looped in front of Childers forcing the keeper to come out for a clearance as his only option.

With possession being scarce the Rafters had to make the most of attacking opportunities and did just that. In the 9th minute Symczak found himself with yards of space as the Rafters recovered a carless ball played by the Jesters at midfield, rather than take the time given, Symczak played the ball to Walcott surging up the left side. Within a couple strides and touches Walcott was 30 yards away from goal drawing defenders out of position. Walcott slid a pass to Alvarez whose cross was cleared out by the Jesters for the Rafters first corner.

The corner opportunity led to the Rafters first real shot attempt as the kick taken landed to forward Barker on the right just outside the 18 yard box and with a right foot strike he swerved the shot just over the right of the cross bar.

In ten minutes the Rafters had created the most legitimate shot attempts while the Jesters looked the most threatening with the majority of possession and crosses cleared out by keeper Adam Williams.

Right winger Jesus Hernandez was able to free himself from the fray with wall passing from Childers to deliver a ball that was lofted from the right to Barker again, whose feint was read in the nick of time as the Jesters’ defender avoided putting his keeper in a one-v-one opportunity with the forward.

Shortly after the shot attempt created for Barker, Hernandez had a crafty dribble as he individually snaked around three defenders but the threating effort was thwarted by a foul. His footwork will certainly be entertaining to watch going forward.

Setting the tone for winning the ball and chances created was Childers, who was more than active in winning headers and initiating the attack with lateral runs and physical play to hold the ball up.

The Jesters played with three at the front attacking the goal; two wing players high with a target center forward Jordan Kinoshi.

Rolando Sanchez of the New Orleans Jesters seemed to be given the go-ahead to take on players along the Rafters right flank.

In the 23rd minute Jordan Kinoshi of the Jesters stayed just on sides on the right flank as his teammate pinched in to create room for him to run on a well weighted through ball. Center half Watson did a decent job of closing down the defender after he passed the back line but was just a little late as Kinoshi curled a ball in the right side of the net to give the Jesters a 1 goal advantage for the home team.

The Rafters nearly answered immediately with a goal as Walcott had time to look up and find a good run from Childers who was called for a questionable foul as he and the keeper met the ball at the same time inside the box.

The Rafters going in to halftime down 1-0 with midfield trying to quickly find chemistry that they’ve been accustomed to in recent matches.

The beginning of the second half was much more settled for the Rafters as halftime discussions seem to help with the nerves of the team abroad.

A keeper sub was made at the half, Tom Fuller for Aaron Williams, as Coach Greg wanted both players to get valuable minutes in place of absent preferred Number 1 Lance Quini.

Williams provided solid keeper play in his debut as the Rafters sustained much pressure.

In the 51st minute Hernandez made a great run on the right flank and took on a defender who attempted to muscle the Rafters fleet-footed winger off the ball. Hernandez was able to cut past the Jesters’ defender and booted a well placed cross that was hardly dealt with by the keeper. Hernandez hustled to the top of the 18 yard box after his cross- recovered the rebound and took a good shot attempt that nearly found the right upper 90.

This was easily the most dangerous the Rafters looked since the start of the match.

In the 56th minute goal scoring regular Nick Hammond came on as his presence was immediately felt when Che sent a pin point diagonal ball to the forward who carried the ball another 7 yards after touch and forced the defender to stay marked.

With the game having better back and forth play, in the 61st minute a ball was slotted to Kinoshi from the left side, inside the 18, in an onside position as he hit the ball to the left past the keeper for his second goal of the match. Rafters down 2-0.

Inside 20 minutes, the pressure was off the Jesters with a 2 goal home lead. The Rafters were making substitutes to keep fresh legs on to muster a late come back.

Regular first team player, Sean French had just taken the field to assume his regular Center half position and what seemed to be a rough tackle turned in to a debacle for the Shreveport side as he was shown a yellow card and straight red seemingly for dissent.

When asked about the red card given Coach Palmer responded with “Coach Emmitt and I’s point of view from the bench, it looked to be a two footed tackle and we won’t know until we go back and watch the video but I think the referee was very harsh and quick to pull the red card out.”

Despite the red card, the team kept the shape and still stayed aggressive. The 10 men didn’t seem to phase the squad as substitute William Awagu shifted from his usual forward position to left winger and was fitted for the task helping in attack and defense.

“We were already prepared for that before the game if we go down to 10 men we take a striker out and play the same formation but with one up top…once we had the red card we played the formation better than with 10 men”, said Coach Palmer.

A man down, the Rafters were good at locating where the support runs were and finding ways to get players up in attacking position.

Awagu(wide left) and Hammond were able to hold the ball up and invite Walcott and substitute Andre Anasi in the attack to get crosses in the box as the game drew to a close.

Things began to get chippy as Hammond went back and forth with a Jesters player after an off-side call, with teammates from both separating the two. Down 2 goals to nil the Rafters were still keen on keeping the ball in play to get a goal opportunity.

It was a puzzling end to the game as numerous fouls, substitutions, and the most surprising- failure to find a ball to play with led to only 2 minutes of stoppage time.

The Rafters endured their first loss of the season away 2-0.

“It was a frustrating night all the way through. The whole idea was having a game Tuesday and then Friday, we couldn’t bring our full strength squad, turn around- play on Tuesday, and expect a good performance [against a conference opponent] on Friday. We’ll go into Friday at full strength and see how we fair but anticipate another good performance”, said Coach Greg

It was a tough night for the Rafters in the Louisiana Cup Derby as tempers began to flare towards the end. With Tuesday’s squad still trying to find its bearings, you can certainly expect the Rafters to come hungry in the second leg next month June 7th as the Jesters travel to the land of the River Jacks. Tuesday night marked the end of an instate friendly. it’s now forever an instate rivalry.