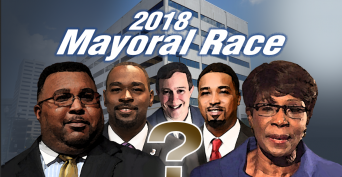 The Shreveport political one, that is.

As the two well know, their “demands” – Council resolutions to remove him, for example – will substantively go nowhere.

If first-termers actually qualify to run for mayor next fall, they will be giving up their council seats to do so.

That would be surprising. We may note, however, that both have been employed by embattled Willis-Knighton Health System, and their employment circumstances may have changed.

Since Crump is seen as Mayor Tyler’s guy, Councilman Bradford, who is not a Tyler guy, hopes voters will do that political math and reward him.

Councilman Bowman, on the other hand, is seen as a Tyler solider who is hitting Crump to confuse that fact. (SEE first link below, my October 29th article, re: Bowman.)

Meanwhile, back at the coal mine where local taxpayers labor-hope-pray for a mayor to pull Shreveport out of its quality-of-life death-spiral, all this stuff seems politically tin-eared.

Such focus on City Council members in election years traces to how Shreveport has long chosen mayors.

Under Shreveport’s current form of government, which cranked up in 1978, mayors have typically learned how our city operates by serving on the Council.

Only two of our mayors since 1978 did not do so: Billy Hanna and Ollie Tyler. John Hussey, Hazel Beard, Bo Williams, Keith Hightower and Cedric Glover were council members at some time prior to their election as mayor.

Ollie Tyler has been a mayor just as she was Caddo Parish superintendent of schools. With due respect, that is anything but what is needed for any city in the shape ours is in.

Tyler was picked, and her campaign heavily financed by, wealthy players whose main objective in all such matters is relative control of mayors.

Judging by all that has happened to the city, if the same folks pick the next mayor, Shreveport will keep digging in the bottom of a municipal hole of corrupt and decaying governance.

Ready to hand-off her shovel, Mayor Tyler will be pressured to hang onto it unless and until these handlers agree on an alternative who is electable and controllable.

Current Councilmen Oliver Jenkins, Michael Corbin and Jeff Everson are term-limited, and none of them say they will run for mayor.

First-term Councilman James Flurry publicly claimed a few weeks ago that he would act to end the mega-corrupt Architectural & Engineering Selection Committee (SEE link below), but no word since.

(Though some loud spinners say Flurry’s Southwest Shreveport district will swing to a black voter majority by election-day 2018, voter statistics blow that up. Black voters are 44.2% of district registration: 8,041 of 18,203 registered voters as of November 1st.)

Other local political insiders are banging as many public tables as possible, including ex-Mayor Glover and his close pal and devotee Caddo Commissioner Steven Jackson.

From my perspective, this is a much different time for us than any back to 1978, at least.

No mayor from inside local politics can be logically expected to improve Shreveport’s condition … in any way.