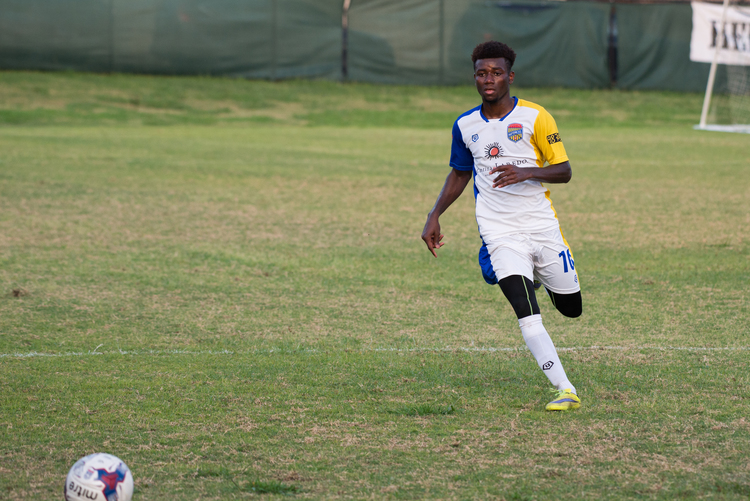 The Blue and Gold will be hosting the Liverpool Warriors Saturday night at Graf Orthodontics field as they attempt to protect their unbeaten home and conference record.

To many, their name and crest are familiar. The Liverpool Warriors are in fact an extension of the well-known Liverpool Football Club based out of Liverpool, England.

The Warriors hold a record of 1-1-3 (all conference games) and have 2 common opponents with the Rafters: Corinthians FC (W 5-0) and the Tulsa Athletics (D 1-1), both conference opponents. Their leading goal scorer is Dave Balyeat with an impressive 5 goal total.

The Warriors most recent game was a lopsided victory as they downed the Corinthians of San Antonio putting in 5 goals to nil, in a very heated match-up. While it’s not taken lightly, Coach Greg Palmer isn’t losing much sleep over the result as his squad prepares for Saturday’s clash.

“Liverpool caught Corinthians at a time when they played 3 games in 6 days. There had to be some tired players within the Corinthians side at that point. With that being said, beating them is always a good result for any team just because of the experience they have. I anticipate us as a group to prepare for the Liverpool game as we do for any other opponent. I always say to the players it’s about us and not so much the other team. Myself and the staff do a great job in scouting the opposition and then coming up with a game plan. This game is no different. We played against Fort Worth in the Texas Trail Cup on Tuesday evening and took a reserve team with some players that have been on the verge of our first team. We had a good performance and those guys will now only push our first team guys to do better. I keep saying to the players and staff that as long as we keep our standards high along with our in-depth preparation, the week leading in to games we will be fine. I gave the players a target from our first 4 conference games: we needed 9 out of 12 points. We have that already but the game against Liverpool won’t stop us fighting for all three points! I want 12 out of 12 at home, I want to make our stadium a field where no one wants to come and play because of how good our fans are and how hard our players make it for other teams to walk away with points from us.” – Greg Palmer, Rafters Head Coach

Seven games into the season the Rafters are in a three way tie in the South Central Conference. Keeper Lance Quini and the defense have only conceded three goals in conference play while scoring has come from every facet of the field- back line, midfield, and of course the forwards. The team has been wildly successful at gaining chemistry and trusting the abilities of each other. One can’t stress enough how difficult this is to do in your first year as a club.

“As the new team to the league we are still trying to adjust and improve with each game. The coach is always telling us, ‘if you can win the game, don’t lose it’, and we have stuck by this philosophy. The experience, teamwork, and perseverance that we have in the defense has really created the foundation for us to be successful as a team. So many times this season we have only seen 30% to 40% of possession and been tremendously outshot during games, but that ability to sustain attack after attack from other teams has been the key for us all season. Our defense does a great job of absorbing that pressure and allowing us to stay in games until the final whistle. On the other side, we have been really fortunate to be a threat from all over the field. We’ve scored all different types of goals through set pieces, counter-attacks, and from open play. Having the ability to be so versatile in attack makes it hard for the opposition to defend because we are constantly dangerous, no matter where we are on the field.”
– Lance Quini, Rafters Goal Keeper

The Rafters will certainly come out with a mission to press and test the fitness of the Warriors while being decisive and patient on attacking opportunities, as they have shown a propensity to do so in games played.

The team is coming off a fantastic home game as they bested the highly touted Tulsa Athletics winning 2-1 with a stunning second half performance. Rafters fans have come to learn their team certainly has the gear to undo their opponents and that usually comes after the referee blows the second whistle for kickoff. The Rafters most recent game came as the team traveled to Fort Worth to earn a draw in the Texas Trail Cup but winning on aggregate (2-0), showing the schedule does not affect the team’s performance home or away.