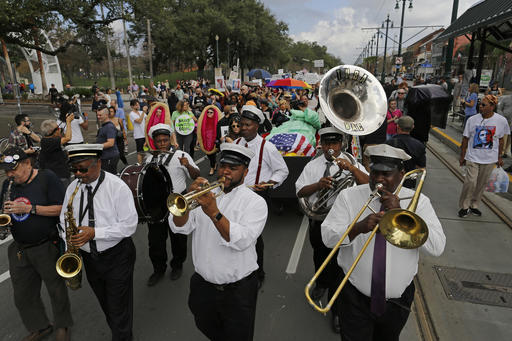 NEW ORLEANS (AP) — It was an oddly festive and uniquely New Orleans-style of protest: A brass band played mournfully as demonstrators lowered a replica of the Statue of Liberty into a black coffin and began wheeling it through city streets.

The so-called “Jazz Funeral for Lady Liberty” coincided with Friday’s swearing in of Donald Trump as the nation’s 45th president.

The protest drew close to 200 participants to Armstrong Park on the edge of the French Quarter. Some carried signs labeling the new president as a racist, a sexist and a liar.

Another protest was set for Friday afternoon at a small park across from City Hall.

Protests continue Saturday afternoon. “Women’s Marches” are set for New Orleans and the Shreveport-Bossier area, coinciding with the Women’s March in Washington.