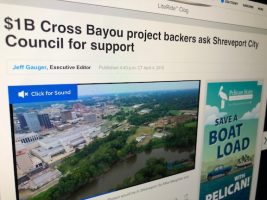 There is more news tonight – just four days after my most recent article on this subject – about the supposed / imagined / dreaded Cross Bayou development just north of downtown Shreveport.

Fantastical or not, this $1 billion bet of scads of public money seems to be scoring significant political gains in City Hall … according to tonight’s strong reporting from Shreveport Times Executive Editor Jeff Gaugher:

As I wrote Saturday, the way-too-fast-for-logic push for the project by some local politicos targets a super-quick deal with City Hall in the form of a “Memorandum of Understanding,” or “MOU,” with “developers.”

Most dramatically, the Shreveport City Attorney is identified by The Times as working on the MOU with these players … something our top City Hall lawyer did little to refute:

“Wednesday, the partners said they had reached agreement with the mayor’s office on language for a memorandum. City Attorney William Bradford characterized the discussions differently. In an interview, he said he had reviewed and offered suggestions about a draft memorandum provided by Gateway but that administration officials had not agreed to specific language.”

Notably, Mayor Ollie Tyler – the City Attorney’s boss – has said on the record that she has taken no position on the project after her own such proposal mere months ago was killed by the City Council in a unanimous vote of 0-6 against.

The seventh council member – who departed the City Council Chamber so he was officially recorded as “absent” during the vote that day – was Jerry Bowman, Jr., now Council Chairman.

Among the many concerns about any agreement of any kind in such a rush, one is heard by far most often: that the MOU is a device specifically designed to provide “front money” to various Cross Bayou Point doers immediately, regardless anything else.

Given the current table-banging by Mayor Tyler that there is no available money for anything beyond bare bones minimums, the City Attorney’s involvement in furtherance of this MOU seems contradictory …

… serious news for taxpayers to digest before the upcoming property tax vote on April 28th.