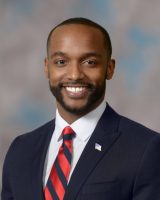 MAYOR PERKINS: THE WORST OF THE RUMORS SEEM TRUE.

It has been a very tough week for any and all who love Shreveport.

As endangered as confidence in local government is, these hits from and by our new mayor seem especially damaging.

Perhaps, more and more Shreveporters are now saying, the worst fears about Adrian Perkins have been true from the jump.

For months the growing fear has been that a group of Perkins’ friends and associates were lining up to handsomely profit by a list of insider deals … apparently corrupt ones.

One of those deals was rumored to be a takeover of the city’s casualty insurance.

We learned early-on, for example, that Perkins staffers executed documents related to that insurance takeover the day before he took his Oath of Office … before he was even mayor, in some inexplicably big hurry.

Then we learned that one of the key players in the scheme, a notably close friend of the mayor, is a criminal prosecutor … a Caddo Parish Assistant District Attorney … certainly a red flag, many of us thought.

Then, as real action kicked in this week, Perkins bailed … jumped the rail … took a powder.

After many weeks of work, the city’s well-respected Internal Auditor joined a majority of our City Council members in a Special Meeting convened to publicly detail key facts.

What the public learned lived up to the pre-meeting whispers about apparent corruption.

Yes, Perkins had handed all that coverage over to a new group, and weeks of internal investigation found that the city ended up relatively uninsured while paying more for the little insurance it purchased.

If there was some misunderstanding, logic demands, Perkins would have attended Monday’s meeting to answer questions. Instead, staff took the heat for him as he spent the next three days confecting his cover-up narrative.

By the time select local reporters were permitted to sit down with him, the result was a lot of insurance mumbo-jumbo and Perkins razz-ma-tazz … in no way useful.

Had he set out to do so, Perkins could not have more convincingly come across as guilty.

For those of us who have worked to sound the warning about Perkins, all of this is, yes, expected, but also sickening.

Of the many unanswered questions and downright scary claims about “who” Perkins really is and why he really came back here, most are validated, at least in part, by what happened this past week.

Why would Perkins hesitate to attend that Special Meeting of the City Council? Why did he need the three following days to cobble together his response, then pick and choose which members of the media he thus used?

(Oh, by the way, it is timely to again ask, why does Perkins operate in public policy terms by way of a not-for-profit group which shields him from the Louisiana Public Records Law?)

At least for now, it seems clear that the worst of the rumors and fears were true from the year-ago jump: Perkins is here to enrich certain friends and sponsors.

If that is not true and accurate, perhaps one or more of his sponsors will explain what really happened this past week in City Hall.

In the meantime, the honest people in Shreveport need and deserve a wall-to-wall federal investigation and prosecution of Government Plaza.