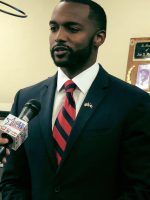 Even some cult-like devotees of Mayor Adrian Perkins may be taken aback.

Well within his first month in office, the 100%-new-to-government mayor has slapped Shreveporters with two numbing acts: proposing a less-than-honest $18-per-month tax/fee for garbage collection and “city reserves”… and attempting to hide his connection to political malefactor Lynn Braggs.

Sadly, too, our City Council is thus far unable to muster more than a “let’s make a deal” response to the tax/fee hike … nothing approaching pure and necessary opposition.

Out in the real world, no city leadership in a hole as deep as Shreveport’s would deliberately keep digging with any such tax-and-spend op.

Worse yet, Perkins is doing so without more than a passing glance at necessary spending cuts.

Without doubt, Perkins’ intended $14 million-a-year “plan” for garbage services, city reserves, and whatever else he is not telling us is a puredee sucker punch …

… Perkins knowingly fails to mention that Shreveporters now pay for our $8.4 million garbage service with city general funds, so passage of his tax/fee would immediately free-up that total for something else.

… There is therefore NO need whatever for the remaining $5.6 million every year to pump-up city reserves.

… Also revealing is Perkins’ continuing silence about the Louisiana-leading property taxes Shreveport property owners – but not Perkins, himself – pay.

Also in this mix is Perkins’ stupefying claim that he will cure our city’s population out-migration with his magic wand … a decline which has been underway (and worsening) since 1986 – the year he was born.

Given that the mayor has not lived here since high school, there is no possible way for him to grasp the damage he intends … assuming he bothers to stay here.

Based on what I am learning, it is entirely possible that he simply does not care.

Regardless that public reaction to Perkins’ new tax/fee is decidedly negative, City Council members are merely trying to whittle it down, perhaps to $12 or so.

Some three weeks after Perkins directly told Times reporter Nick Wooten that Braggs was not at all “involved” in his campaign, Perkins paid Braggs’ company $20,700 … carefully waiting five days after he was elected to do so.

Another $4,250 was paid to Mrs. Braggs for “speech-writing” and “election-day activities.”

In its October 3, 2017, report about the federal investigation apparently targeting Braggs, KTBS-TV News wrote and broadcast these facts (SEE report link below):

“Lynn Braggs, former campaign coordinator for Tyler and her predecessor, former Mayor Cedric Glover, has worked for several companies that hired him to help them get city business.
In a deposition, Braggs … admitted working for three companies that were awarded millions of dollars in city contracts over the past four years.
In the case of one company, it signed a standard affidavit that is part of a city of Shreveport contract, saying no person or firm was paid to solicit the contract.”

At least for those who read my articles, none of this is surprising … which, of course, in no way softens the blow(s).