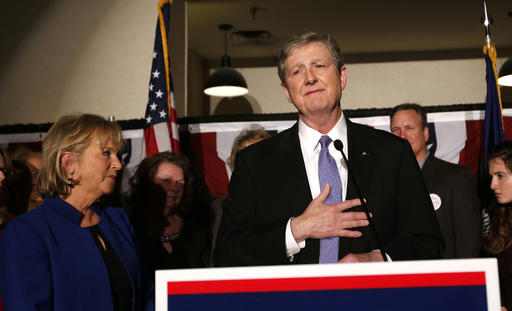 Kennedy: ‘Lot of work left’ as treasurer before Senate term

The Republican winner of this weekend’s runoff election said he wants to help craft ideas for stabilizing Louisiana’s state budget during his remaining tenure, saying he doesn’t believe Gov. John Bel Edwards or Louisiana’s legislative leaders know how to dig out of the state’s perpetual budget woes.

“My first reaction is I don’t have any plans to resign immediately. I’ve still got a lot of work left to do. Our budget’s in a mess,” Kennedy said in a call with reporters. “Clearly, the problem continues to be that we’re spending more than we take in. And I want to help the administration and the Legislature figure something out. I don’t think they have a plan.”

When asked what he could do to reverse years of financial troubles within the remaining weeks as treasurer, Kennedy said: “I don’t know, but I’m going to try.”

Even after he’s sworn in as one of Louisiana’s two U.S. senators, Kennedy said he still intends to be “very involved in state issues.”

“I’m not going to be one of those people who go to Washington and you never hear from them again,” he said.

Kennedy won 61 percent of the vote in defeating Democratic Public Service Commissioner Foster Campbell, giving the GOP a 52-48 edge in the Senate when the new term begins. He takes office Jan. 3, though his actual exit date from the treasurer’s office will determine whether the special election to replace him is held in March or October.

Edwards spokesman Richard Carbo said the governor has to receive notice of Kennedy’s resignation date by Wednesday to hold the special election in March. Kennedy wouldn’t have to step down by Wednesday to trigger the earlier election date, just file paperwork setting his official last day.

Kennedy will be in Washington on Wednesday for orientation to the new job.

He said his immediate priority in Congress will be to help with Louisiana’s recovery from the March and August floods. Congress has given Louisiana about half of what Edwards requested in relief aid. Louisiana’s incoming senator said he didn’t have a specific number of what additional money the state may need, and he took a swipe at the Democratic governor, saying Edwards first needs to solidify plans to spend what has been received so far to prove it won’t be wasted.

“That was a big part of the problem in Washington getting resources. Democrats and Republicans in Congress kept saying, ‘Well, how are you going to spend the money?'” Kennedy said.

During his five terms as treasurer, Kennedy clashed repeatedly with Louisiana’s governors and some legislative leaders, proudly building a reputation as a political outsider — a reputation that bolstered his campaign for the Senate in a year when long-time politicians weren’t favored.

Now that he’ll be one of 100 senators and need relationships to make policy changes? “I’m not interested in making political friends. I’m interested in helping people,” Kennedy replied.

He said he doesn’t anticipate problems working with his new colleagues, however, and wants to take each one out for lunch or dinner to introduce himself.

“Maybe it’s a Louisiana food thing,” Kennedy said. “But I think you get to know somebody better over a meal.”