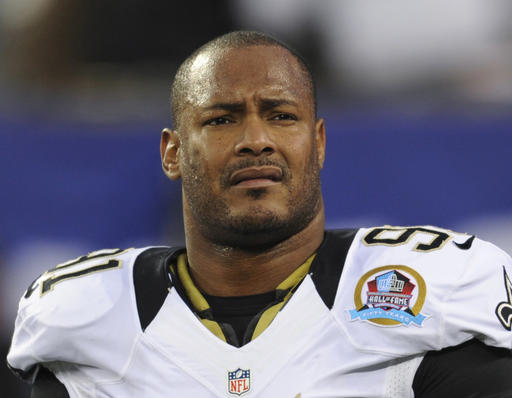 NEW ORLEANS (AP) — One car rear-ends another on a Saturday night. People argue. It escalates.

Ten or so gunshots later, one driver is dead and the other waits nervously to give his side of the story to police.

Conflicts settled by gunfire are tragically common in New Orleans, but there was nothing routine about this one: The dead man was retired football player Will Smith, a star on the 2006 Saints team who helped lift the stricken city’s spirits with a winning season after Hurricane Katrina, and played with the team when it won the franchise’s only Super Bowl three seasons later.

The accused is a 29-year-old former semiprofessional football player named Cardell Hayes. The owner of a tow-truck company and the father of a 5-year-old son, Hayes is described by friends as soft-spoken and even-tempered — hardly the type to erupt into a lethal road rage. His attorney has been laying the groundwork for a self-defense argument ahead of a trial that opens Monday.

Jury selection started Monday with about 130 potential jury candidates filing into a New Orleans courtroom. It is expected to be completed by Tuesday afternoon.

Outside, a handful of protesters brandished signs that read, “Free Cardell Hayes.” Hayes was wearing a dark suit Monday; he previously had appeared in court dressed in prison orange.

Smith’s local popularity and national renown could prove to be obstacles.

“Will Smith obviously was a beloved member of the New Orleans community,” Loyola University law professor Dane Ciolino said in a recent interview. “And that’s going to make the defense of this case all the more difficult.”

Smith’s shooting death is strangely similar to that of Joe McKnight, another former NFL player who was shot and killed just last Thursday in a New Orleans suburb after a road rage incident on a bridge spiraled out of control. The man authorities identified as the shooter in that case — Ronald Gasser — has been released from custody with no charges as the investigation continues.

Snippets of surveillance video from near the scene, police statements, and testimony from pre-trial hearings paint a picture of what happened on April 9:

Smith, his wife and two friends left a restaurant in New Orleans’ Lower Garden District and were heading downtown on Magazine Street. At one point Smith’s SUV appeared to bump the rear of a Hummer that had come to a stop on the street.

Rather than stop, Smith swerved his SUV around the Hummer and continued downtown. Moments later, the Hummer hit Smith’s SUV from behind, shattering the rear window and pushing it into the rear of another car — in which more friends of Smith were riding.

Who the aggressors were in the ensuing conflict will be at issue in the trial. Hayes acknowledged to at least one police officer that he was armed when he got out of his vehicle. He said he was accosted by an unarmed Smith and others, and that Smith struck him, although police said there were no obvious signs of injury.

The first officer to approach the scene after the crash was an off-duty rookie who had been at a nearby bar. Christopher McGaw has testified that he approached the scene as the argument grew more heated, ducked for cover when gunshots rang out, then approached again, finding Smith slumped across the front seat of his car, one hand extended toward the glove box.

“What was I supposed to do?” Hayes is heard asking McGaw, on a recording of a 911 call McGaw had placed at the scene.

Why Smith drove away from the scene of the first, apparently minor accident; whether Hayes intentionally rammed Smith’s vehicle moments later; whether Smith was reaching for a gun when he was shot to death — all are issues that will likely be addressed at trial.

Smith had returned to his SUV when he was shot and police said there was a loaded gun in the vehicle. That might help the defense argument that Hayes shot in self-defense, Ciolino said. But it’s an argument that could be blunted by the fact that Smith was shot eight times — seven in the back, one in the side — Ciolino added.

Prosecutors also have made much of the fact that Hayes’s Hummer had hit Smith’s SUV from behind so hard that the rear window shattered.

Another odd twist in the case: A friend of Smith’s who wound up at the scene the night of the shooting is William Ceravolo, a retired New Orleans police officer who had dined with the Smiths before the accident.

Ceravolo was among six officers sued by Hayes after police killed his father, Anthony Hayes, in December 2005. Police settled the lawsuit in 2011, and the terms were confidential.