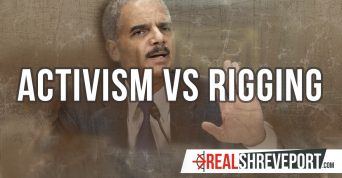 GOING UP AGAINST ERIC HOLDER IS ALWAYS WORTH DOING

I plead guilty. I am no fan of former U. S. Attorney General Eric Holder. And now he wants to run for President.

To me, Holder’s red-hot political activism for America’s hard political left was as unseemly for a U. S. Attorney General as was John Mitchell’s from the right in Richard Nixon’s first term.

Now, as President Trump and his party focus on the issue, Holder attacks any who believe that only U. S. citizens – not all residents – should be counted in each decennial census for purposes of Congressional representation.

A tiny few of us in Louisiana, and I am included, took center stage in stoking these fires just before the 2010 Census.

During 2008 and into 2011, I worked with Dr. John S. Baker, Professor Emeritus at the LSU Law School, to push this issue to the forefront in Congress, and before the U. S. Supreme Court.

On the front-end of our purely self-financed work was a widely shared, cursed, praised and studied op-ed we wrote for the Wall Street Journal entitled “Our Unconstitutional Census,” published on August 10, 2009.

The article link is included below. (Click on the article to expand.)

In November 2011, thanks to work led by Dr. Baker and assisted by Dr. Troy Blanchard at LSU, our subject lawsuit – Louisiana v. Bryson – made it to the U. S. Supreme Court.

Obviously, the 2010 Census was complete by then, and the Court chose not to hear it.

As the 2020 Census approaches, the President wants to do what our work targeted and sought … including restoration to the Census of a question last asked in 1950:

“If foreign born, is the person naturalized?”

By including non-citizens, states without many such residents – Louisiana included – face the loss of seats in the House of Representatives. Such was at issue when we lost House seats in 1990, then again in 2010.

Most Democrats, in particular, want non-citizens included in all such policies … notably including the right to vote.

Now on defense, needing to energize his party’s base, enter Mr. Holder and his New Republic article. (SEE link below.)
As Holder well knows, and as Dr. Baker and I learned, the Census Bureau is an arm of his party. He and the Bureau know what happens if that question is asked in any decennial census.

Silence from our grass roots empowers Holder’s push. Civic awareness and activism, as always, do the opposite.

Dr. Baker and I embarked on this work simply because I read an article in a Starbucks one day in 2008, and telephoned him, right then and there.

He shared my disbelief. We committed to the work. I did numbers and he did law. We found others of like mind. We proved and made our case.

Who knows? Maybe one political rig-job can be unrigged.

“… Congress must not permit the (Census) bureau to unconstitutionally redefine who are “We the People of the United States.”

“The attacks on the census process go beyond politics—they represent a major assault on representative American democracy.”

Counting “only” Americans in the Census is a major assault on American democracy?!

Let’s see Holder campaign for President on that platform.