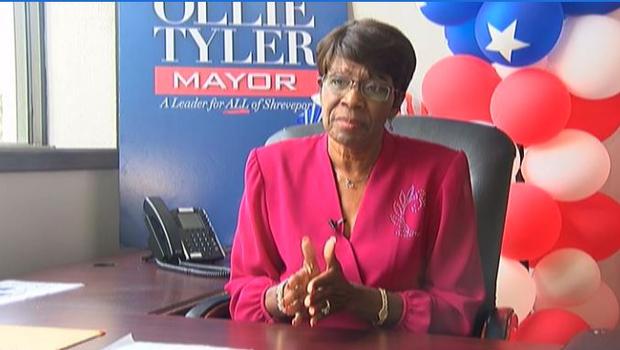 DID MAYOR TYLER BOLD-FACED LIE TO US, OR … ?

Again, this red-hot spotlight is on Mayor Ollie Tyler: the rolling City Hall disaster tied to water and sewer services.

The subject was notably probed in an August 6th forum for mayoral candidates at Southwood High School by moderator John Lorick.

JOHN LORICK: If you are elected mayor, will you call for a third-party audit of the water department and/or other departments at City Hall?”

MAYOR TYLER: Just because a lawsuit has been filed does not mean something has been done wrong. So, let me say that we’re going to, um, address that issue, um, and I think some of your comments, Mr. Lorick, is (sic) probably incorrect … it’s the way you ask the question. It’s like how often do you beat your wife? So, I just want to say that we will be addressing that lawsuit, um, we got it today and just like we’ve done the others, we’ll be addressing that one and we’ll do our due diligence. Thank you.

L: Will you answer the question please? The question is: if you are re-elected, will you call for an independent, third-party audit of the water department?

T: You are asking that question as if something has been done wrong …

L: No ma’am, I’m asking every candidate the question, and a simple ‘yes’ or ‘no’ would do, please.

T: Mr. Lorick, if nothing has been done wrong, I will not be doing an audit.

L. The question is would you call for an audit of the records?

T: If something has been done wrong, I will.

T. My administration is very transparent … more transparent than anybody else. And if something has been done wrong, we will do the audit. When I’m re-elected.

Tyler’s comments and protestations notwithstanding, her City Attorney William C. Bradford, Jr., has, the day before yesterday, written the following to City Council members, the Council Clerk, and the Lee O. Savage campaign:

“Please be aware that the City of Shreveport has already undertaken an external audit of its Water Department pursuant to Request for Proposals 17-811. Carr, Riggs and Ingram (CRI) was awarded this contact in March 2018 and is currently reviewing all facets of the water department’s operations. We anticipate this audit will conclude within two months; at which point CRI will provide findings to the City. This audit was executed at the direction of Mayor Tyler and included participation from members of the City Council. I trust this update addresses your concerns.”

We may note that (a) CRI is not considered by some as “external” / or independent, (b) Council member Stephanie Lynch has written that she knows nothing about this, and (c) as I can personally attest, the Tyler administration is the stone-cold opposite of “transparent.”

… Tyler lied, or forgot (!), or did not know about the audit when she spoke at Southwood, or

… her campaign is in trouble and she thinks an audit (real or rigged) will stop the bleeding.