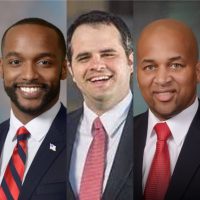 Technically – but not really – the Shreveport City Council voted 6-1 today against the garbage tax proposed almost a month ago by Mayor Adrian Perkins.

By the time the votes were finally cast, however, independent City Hall observers could be forgiven for expecting the “new” (not really) replacement tax plan to be quickly unveiled.

In fact, as it has turned out, there is no telling how long ago this “new” plan was arranged for today’s show.

Down goes the $18-a-month dumbfounder Perkins originally plopped on our tables, and in its place is the new tax-and-spender at $13-a-month from rookie Councilman John Nickelson.

(Yes, yes, I well know everyone in on the deal calls this a “fee,” but given that it is both fee and tax – garbage collection and method of pumping up the city’s reserve – it is a tax on which we the people should always vote.)

Some may believe, as we are now told, that the lower-cost plan will establish a Solid Waste Enterprise Fund.

The new / latest Shreveport tax plan is to be voted on two weeks from now.

All of this, of course, hides the fact that no one in city government has yet been able to convince our mayor that NO new taxes are justifiable in Shreveport / Caddo.

Shreveport is bleeding residents / households like a gut-shot beast running through the woods. Given that newcomers are as rare as proverbial chicken teeth, there is a notably decreasing need for garbage collection (and other city services).

Thus, raising taxes without cutting the heck out of existing spending is downright dopey.

How in the ever-lovin’ world does our new (but already old to us) mayor think we have missed the fact that he could not possibly have tried to cut spending when he hammered us with this tax plan two weeks into his four-year term?

Listening to Council members today / tonight, one thing was certain: no one was pounding the table in recognition of such obvious facts.

Put simply, Perkins and his handlers clearly intend for this tax to become local law no matter what or when. If four Council members do not choose to stand up to the mayor right now, this may well become the first of many such tax-raising ops.

If / when that reality kicks in, population out-migration can only logically be expected to accelerate even more.

Oh, by the way, the only “yes” vote for Perkins original tax plan was City Council Chairman Jerry Bowman, Jr.

I mention that because I predicted it in my January 26th article, having documented that his spouse had been paid $14,000 by the Perkins election campaign. As I wrote it in that article:

“I know of no law which prohibits payments to such spouses, but the Councilman should not expect Shreveporters to believe his City Council vote does not now belong to Perkins.”