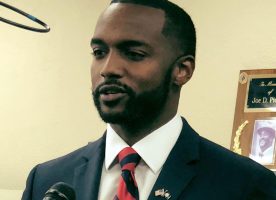 Shreveport Mayor Adrian Perkins is being forced to act on a matter he had no plans to touch mere weeks before the vote on his ill-conceived and ill-timed $186,000,000 bond issue …

… screaming misfeasance in the City’s Department of Finance.

Taking point with him is City Councilman James Flurry, the Chairman of the Audit & Finance Committee. Flurry used a meeting of the group this past Monday to say he will act to eject long-time Finance Director Charles Madden.

Then, to boot, I find open-source information that David Creswell, Jr., the City’s Controller for the past three-and-a-half years, is now in the job market. Creswell has posted a Linked-In resume in which he shows “October 2019” as the ending date of his City Hall employment:

No word yet on additional firings.

This political devil for Perkins jumped up in the two-weeks-ago release of the city’s 2018 Comprehensive Annual Financial Report (CAFR). That report includes comments by the external auditor, Carr, Riggs & Ingram, detailing an unheard of twenty-seven financial management “weaknesses / deficiencies.”

(For details, here is my day-before-yesterday article on that subject:
http://realshreveport.com/buckle-up-heres-how-scary-shreve…/)

The political timing for Perkins is worse than merely lousy.

In a matter of days, Shreveporters have learned both that our city-in-decline has debt totaling a staggering $1.054 billion dollars, AND that rampant misfeasance is gutting City Hall’s Department of Finance.

(While Flurry might have acted to slow the roll of this epic debt dunk, he instead joined with the three City Council members Perkins seems to have in his pocket – Jerry Bowman, Jr., James Green and Willie Bradford – to set the bond vote for next month rather than next spring.)

Yes, heads should certainly roll in City Hall, but that only spotlights how foolish it is for Shreveport to now take a mega-dive deeper into debt.