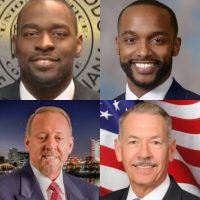 In an article last week, I detailed some of the demographic, fund-raising and election result facts of Mayor Ollie Tyler’s 2014 election.

No one I know confused that campaign with high-interest politics, but compared to the one now underway, that one was a barn burner.

And this one may be set to fizzle even more.

(At this late date, the names of any departing candidates will remain on the November election ballot.)

Here are a few associated facts:

The Caddo Parish Commissioner has several strikes against him, beginning with the fact that he is broadly believed to be a stand-in for highly unpopular ex-Mayor Cedric Glover.

Additionally, (a) Jackson knowingly falsified his residence address on his official, signed qualifying statement, and (b) has attracted media and other attention for repeated instances of pilfering license plates belonging to others for use on his own vehicles.

Now, an anonymous group of Jackson enemies is whispering / claiming he is guilty of more serious crimes already known to local law enforcement.

From the jump, Perkins’ campaign has seemed strangely short on substance. He entered the race as a stand-in for State Senator Greg Tarver, but has not lived here for the past 15 years. Worse yet, he has never voted in any election in Shreveport / Caddo … or anywhere else, apparently.

Now, Perkins is missing mayoral candidate forums. Given that he has very low name recognition, that is a notable error, and perhaps evidence that his loudly rumored split with Tarver is a fact, and has seriously damaged his chance of raising the money he will need.

Nothing has more marked this campaign than the inability of the Republican Party to rally around one of these candidates … likely the only shot for Republicans to have one of theirs in the run-off.

Given that this happened, too, in Tyler’s 2014 win – second-place primary finisher Victoria Provenza is an independent), some watchers are suspicious that the party leadership actually approves of a second term for Tyler.

Regardless, different factions in party leadership are now lobbying hard for Savage and Taliaferro, respectively. Notables among these players believe that one or the other will exit.

What dovetails with these various tales / reports / rumors is a strong undercurrent that candidate fundraising is thus far unusually difficult, more or less across the board.

If true, and we will know pretty soon, such makes some sense.

First, the local economy is awful, and those who raised / gave a third-of-a-million bucks to Mayor Tyler in 2014 want that investment protected, with as little additional money as possible.

Second, the other candidates are making no case at all that they can beat Tyler.