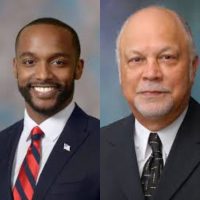 In the past few months, I have written several articles about the Shreveport mayor’s race, and the intended candidacy of political neophyte Adrian Perkins.

The articles have focused on Perkins’ ties to Louisiana State Senator Greg Tarver, including the related history of a deep political split in Shreveport’s black community.

Now, following those articles, Tarver is said by one source to have dumped Perkins.

That source, an on-air personality at a local radio entertainment show, says Tarver told her Perkins was “not a man of his word” who had “misrepresented himself” to the deeply experienced political maker / breaker.

Perkins is said to have then – immediately, as if on cue – responded that he “respected the Senator’s decision not to support” him.

Almost no one who has contacted me on the matter bought in. Most, in fact, default to the sensible assumption that this is a ruse intended to insulate Perkins from fall-out tracing to Tarver’s high negatives among seasoned white voters.

If one is to believe Tarver and Perkins are kaput, one must strongly wonder how Tarver is only now learning something of such consequence about Perkins.

Tarver has mentored – some say “helped raise” – Perkins for years, and the young man specifically notes that Tarver “reached out” to him in 2012 to recruit him for this mayoral run.

Other doubts trace to the fact that neither Tarver nor Perkins were interviewed / questioned on air by the station, regardless that the show specializes in doing precisely that.

Instead, an on-air personality interviewed Tarver by phone, off-air, during the show, then related to listeners things Tarver is said to have said. A few words attributed to Tarver were later posted on the station’s website.

The on-air talent is a friend of Perkins’ opponent, Mayor Ollie Tyler, and recently joined the Tyler administration as an appointee to the infamous Architect & Engineering Selection Committee.

The next day, Perkins held a “news” conference to introduce a group of local elected officials who support him, but after much fuss and hype, the show was decidedly unimpressive, including only three Caddo Parish Commissioners: Lyndon Johnson, Stormy Watts, and Jerald Bowman.

Perkins is not running for the Commission, of course, but another Commissioner, Steven Jackson, IS running against Perkins, and is obviously no friend of Johnson / Watts / Bowman.

Perkins specifically noted at the unveiling that another official endorsing his candidacy is Shreveport Councilman Oliver Jenkins … who failed to show.

In February, I asked Jenkins if the rumors of his support for Perkins were true, to which he responded, “I will support fellow veterans in their pursuits, whether in the private sector or for elected office.”

As for Tarver, unless and until some other candidate’s name is on the senator’s notorious and very lucrative (for him) election-day “sample ballot,” all such claims are mere chin music.

Too, whether Perkins or someone else, Tarver and his group of ministers and other players will certainly have a candidate … the most direct route to politically “owning” a mayor.

Tarver or no Tarver, Perkins’ absence of preparation for the job raises questions he must satisfactorily answer before his candidacy is legal and otherwise legitimate.