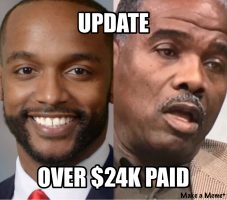 In a screaming contradiction to his pledge made to the Shreveport daily newspaper just weeks ago, Mayor Adrian Perkins did, in fact, funnel campaign funds of at least $24,950 to companies and family members of local political heavy Lynn Braggs.

“… (candidate Lee O.) Savage also said Perkins has been photographed at public functions several times with Braggs – including at a crawfish dinner.
… Braggs, however, IS NOT INVOLVED in Perkins’ campaign, Perkins said.” (Emphasis mine).

The campaign made an additional payment of $250 to Bragg’s wife, Sharon, for “election day activities.”

Federal authorities investigating Braggs and others will not – do not – say where their investigation now stands.

I thank those who contacted me on these subjects.